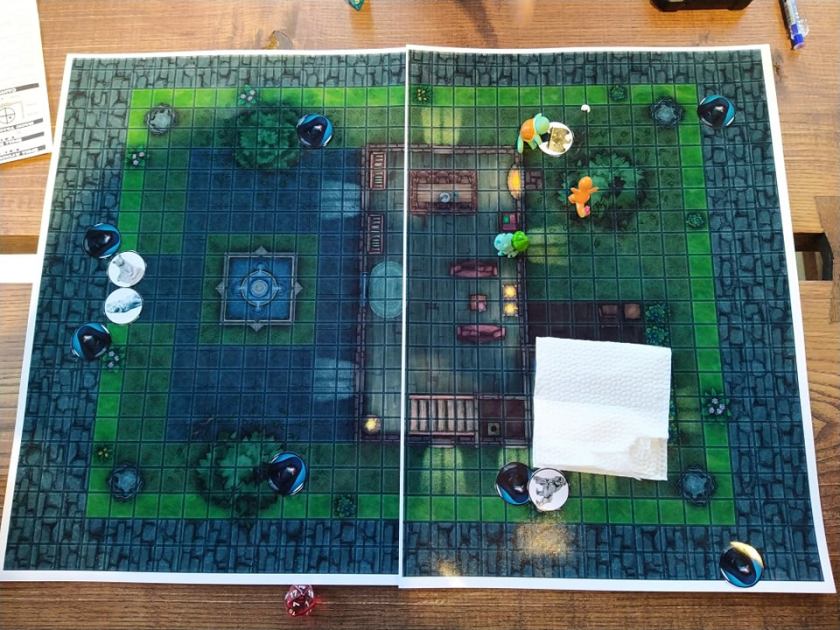 Hi all, today for this campaign journal I’d like to do something different yet again and take you through my preparation process as a DM. I hope it doesn’t spoil the fun for my players (I know that Khoa reads the blog) and so I must keep this text spoiler-free as much as possible.

As a group, we are four people.

Firstly, there’s me, the DM.

Secondly, we have Khoa, the decision-maker and my rules lawyer (I actually like rules lawyers, they save me a lot of time). He plays the handsome but murderous rogue Ninetails. He likes to use all his skills and uses his movement effectively to activate his sneak attacks during combat.

Thirdly, Nhat. He plays the half-elf sorcerer Nhat. He had a bit of trouble getting used to the game at first (a lot of new players tell me my playstyle is too “open”) but has proven to be a good strategist in a pinch. He likes to roleplay his character as a kind of evil Disney princess and hates every single NPC he has ever met (except the children, which he wants to adopt).

Fourthly, we have Tuan, the human halberdier. He was originally invited as a guest and I tend to forget that fact. I expect him to be there every session but it’s sometimes just not possible for him. I built his character for him, based on what he wanted to play flavor-wise, but it’s becoming more and more clear that his playstyle doesn’t really match his initial idea so when everyone hit level 3, I let them adjust their characters. It also coincided with the Pathbuilder app being updated with the Pathfinder 2e Advanced Player Book update (which you should definitely check out).

When preparing my next session I’m usually faced with a few decisions to make:

How can I push the story forward?

My past players have often complained about how slow the campaign was moving (that’s what happens when you fight against the rails and don’t catch any clues or investigate, heh) so now I give myself the mission that I MUST include one hint or event in the upcoming session, no matter what happens. For this particular session we’re covering today, the players would find a piece of dungeon map, to be used as a plot device down the line.

How can I make my players feel like their decisions matter?

This is a tricky one as I have a pretty bad memory. Have an NPC hold a grudge about a past insult. Make players’ actions reflect in the world.  Have more than one way for an encounter or interaction to go. Have enemies run away, to have them come back later better prepared. After all, ultimately, this game is cooperative storytelling. To me, the DM shouldn’t have the biggest impact on the story, the players should. Let them and the dice take you to unexpected places.

How can I satisfy each player?

What do each player like to do? Some people like to discover the world or get exposure on their backstory. Others like to interact with NPCs (talk, haggle, intimidate, etc). Combat is usually pretty satisfying for everyone provided it doesn’t last too long.

Generally speaking, players build their characters with a goal in mind. If you pay attention to the details of their build (or even just their class) you should have no problems making them happy. For example, rogues love to use their skills and stab. Barbarians want to rage and to crush their enemies, to see them driven before them, and to hear the lamentations of their women. For Wizards, it will depend on their chosen school of spells but usually, they’ll love to trick people using their magic cleverly, or simply blow up a room full of goblins with a well-placed fireball.

How can I satisfy each character?

Different from satisfying each player, seeing the character as an entity can help you put invisible rails around or create interesting encounters, and this is what I kept in mind for the session I will cover lower down the wall of text.

How should I reward everyone?

This is a combination of player-character satisfaction. XP, magical items that are actually useful, information, gold… everybody’s different… but not that much. You can always contact your players privately and ask them what they’d like to find as loot.

How did I prep for session #6:

Firstly I had to act on how the last session concluded: the adventurers agreed to help the thief guild who rescued them, in order to pay back their life debt. They got a bit of info during the last session about their mission and I kept things mysterious, so that gave me a lot of creative freedom. If I had more things prepared in advance, I would have given them more details – I like to reward player curiosity.

My first order of business was to design the battle map. I recently got myself an Inkarnate pro subscription so I took an evening to flex my battle-map-making muscles. It took me two hours to make this: 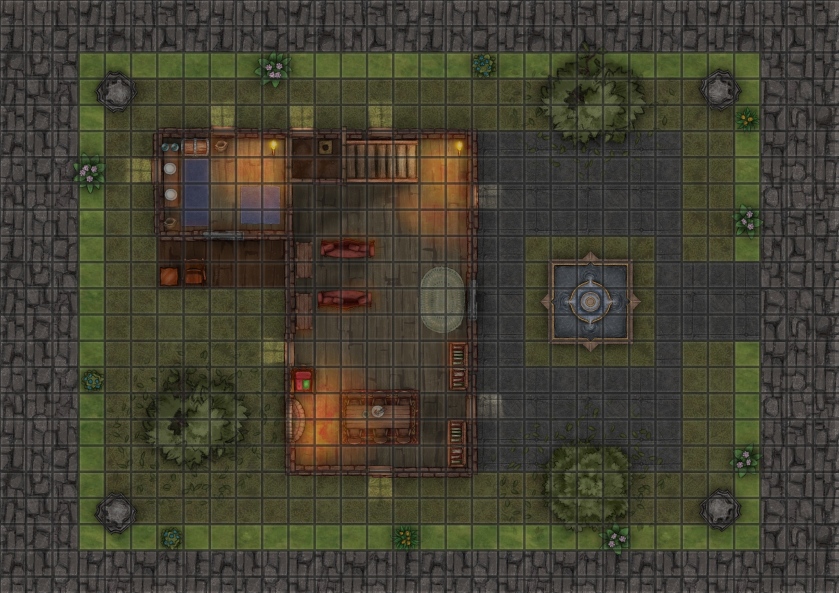 And I enjoyed every minute of it.

There are a few things to look at here:

The heroes would try to sneak in at night, so I designed the map for night-time. Since they are sneaky-sneaky I added light sources (candles and a fireplace) and behind the DM Screen I actually kept track of where the characters stood, for Stealth bonuses. The rogue and the sorcerer really felt that they needed to sneak and made use of the trees and line of sight really well, thanks to the ominous warnings of four enchanted statues guarding the place. An eagle, a bear, a lion, and a gorilla carved out of stone were silently observing the grounds.

Those are standing at the four corners of the property, represented by skull statues.

I also told them about the magical hedge that would alert the magical statues when touched. I didn’t tell them about the flowers growing on the hedge (because I thought them up as I made the map). I put them there to challenge myself as a DM to make more complex encounters: the flowers were magical and would put anyone who touches them to sleep. I demonstrated this during combat, with the help of a poor NPC.

Finally, on the building I put several windows and a door, giving the players different choices to approach the situation. It worked: during the session instead of entering from the first side they saw, the group circled around to scout and get more information and chose the shortest route to enter the house, according to which statue they found the least scary: the eagle. 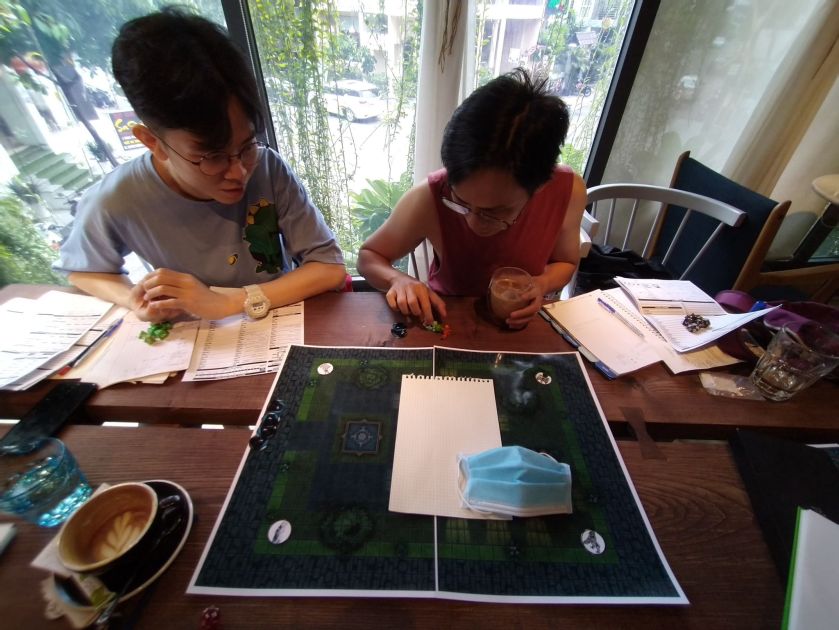 For the enemies, I made a list of things I wanted them to face. There were four living statues to sneak around, each represented as a different animal. There was the NPC strike force, joining them to make a diversion. What would be inside the house that I described as a mysterious, magical manor?

I decided to include a monster I’ve wanted to use ever since I saw the MtG card Gadwick, the Wizened and Overwhelmed Apprentice: the flying tome.

A quick Google search reassured me that I was not so clever and that other players had already attempted to stat what I had in mind: the Flying Tome Swarm (which was also featured in Discworld novels, now that I think about it).

Inspired by this monster I decided that this manor would be the house of a retired wizard, which then gave me an idea for plot advancement. You see, the campaign started in this abandoned city where people get teleported in randomly and so far my players have found zero clues about why they are there or who used to live in the city, except for a few books they have found, written in draconian.

So I put an old draconian wizard on the 2nd floor. He would be there to provide exposure if my players wanted it. Turns out in the end they murdered him and started a fire in his room (again) so they didn’t learn much from him, but I did remember to give them the map.

Back to the Flying Tomes Swarm, I had intended to use this monster as a way to introduce my players to damage resistance but Nhat the sorcerer very cleverly used a spell to dispose of the two monsters efficiently. Since Khoa had been sneaking inside the house properly (but still triggered the swarm awakening), when Nhat entered the house he was instantly mobbed by them and used Acid Burst! 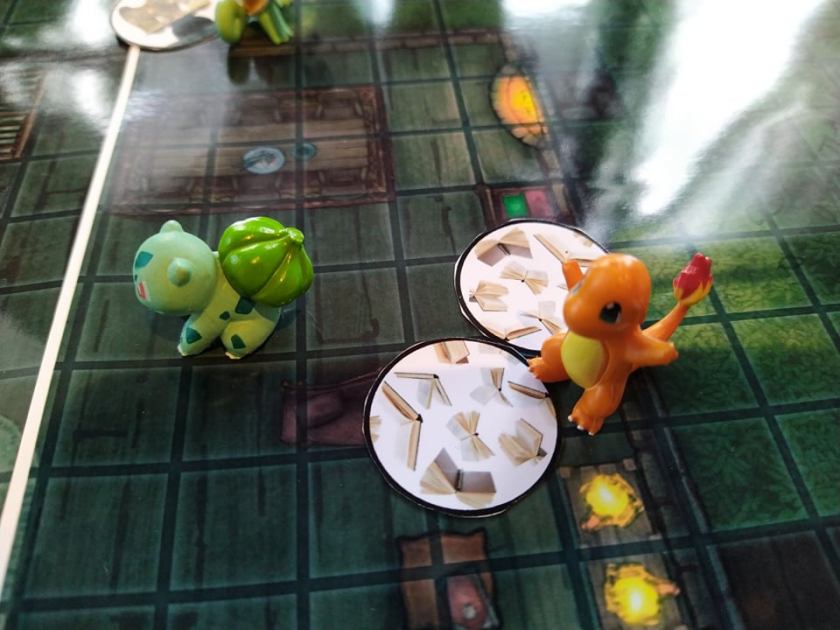 Pictured here are the rogue as Bulbasaur and the sorcerer as Charmander. I made the tome tokens myself using Canva.

While I was making that session’s tokens I remembered that my players are avid Pokémon players and that I had the three original starters as figurines, which they absolutely loved to use in-game.

The last thing I want to cover today is how I prepared the tokens. As I sold ALL my TTRPG material a couple of months ago to make room for a third fish tank, I had no minis to use whatsoever, paper or plastic. During the last session we used buttons as tokens and in the past, I’ve used chess pieces and the likes, but I find that it’s more fun to use something that represents the actual threat… especially if I’m going all out with a map.

And so I turned to Canva, which I’ve been using to create my homebrew boardgames. In a matter of minutes, I had created what I needed and emailed the file to my favorite print shop here in HCMC.

You can see here the NPC strike team, the four statues, the tome swarms, a fire elemental, a giant centipede and an elderly draconian. I got them printed on glossy paper along with the battle map and the cut-up dungeon map. I arrived early at the coffee shop to have time to cut everything up and get psyched about the whole thing. We had a blast.

The rogue consulting his character sheet for inspiration. 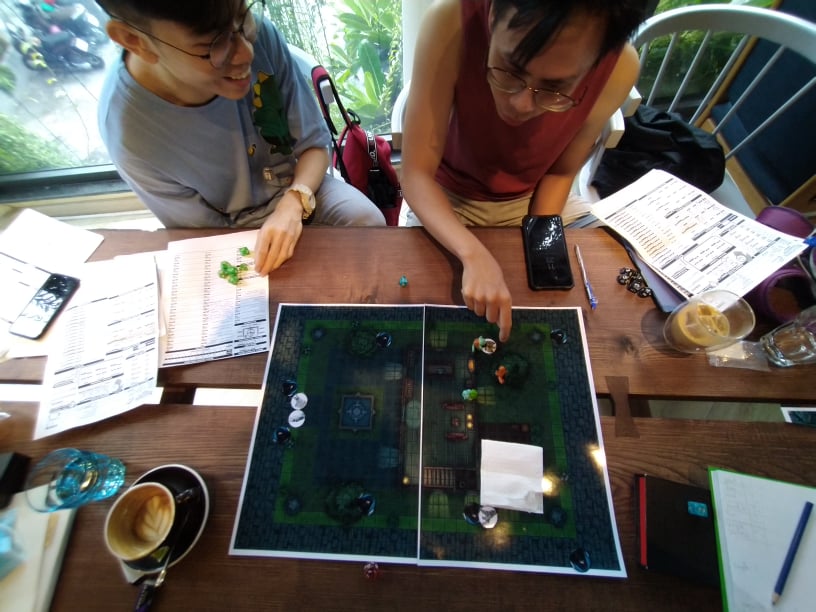 The rogue and the sorcerer sneaking in under the cover of a tree while the halberdier distracts the Eagle Statue.

The map and tokens in action. The tissue paper is acting as fog of war to hide the second floor of the manor.

As always, thank you so much for reading!