I’ve just managed to join a weekly online campaign with local players here. We’re using Discord and D&D Beyond (all new to me) and so far it’s been very smooth.

We’ll be playing in the Statera setting. I was tempted to make an artificer but in the end, decided to go with a Water Genasi Druid.

Lore for the genasi is remarkably sparse on the official D&D Wiki! I thought I’d add a bit of presence to these strange people on the internet by posting my character backstory.

I found this on another blog!

Driftwood the Druid is a Water Genasi that grew up on the coast as an orphan. Unable to recall his life before the age of 10, he remembers surviving mostly by spear-fishing in the ocean, living in a small cave near on the coast, near a small fishing village.

Living so closely with nature for an extended amount of time, at some point during his teenage years Driftwood felt something change inside him. He started feeling connected to nature. Soon, he found that he could talk with animals and command them to do his bidding. He could feel a storm coming, he could tell if the sea was angry.

He realized that he had druidic powers.

A few moons later during a particularly violent storm, Driftwood heard a faint scream carried by the wind from over the sea.

Standing on the shore peering at the stormy waters, Driftwood made out what seemed to be a capsized boat in the distance. Being a water genasi, he couldn’t drown. He figured it was worth a shot to try and save whoever was screaming. He had spent many days staring at the small ships in the distance and always wanted to speak to the sailors and fishermen but had been too scared to do so.

Swimming as fast and strongly as he could, going through the most excruciating physical effort he had ever done, Driftwood reached the capsized boat, floating and bobbing with the waves. Violent winds were whipping the surface of the water.

“Ah! Help!” screamed a man on the other side of the small fishing boat.

Diving under the boat, Driftwood made his way to him. Resurfacing he saw a man desperately holding on for his life, staring incredulously at Driftwood.

“Help! Please…” and with this, the man strength’s gave and he slipped under the surface.

As he feared, another human was trapped in the cabin, surviving in an air bubble. A young teenager, terrified. He looked at Driftwood as if his final hour had come. And it would have if it hadn’t been for the young selfless druid.

“Your father is on the shore. I brought him there. I can help you if you trust me”, replied Driftwood calmly.

In the upside-down cabin, the world seemed quieter. The vessel bobbed with the roll of the large waves, the wood creaked. Maps and wooden objects floated calmly.

The teenager holding on to a beam in the wall, stared at him.

Driftwood suddenly felt like he could convince the teenager in a more… unnatural way, as he did with the animals he met near his cave. Guided by instinct he started chanting quietly and made an intricate hand gesture. The stranded young man was quickly charmed and docile. He proceeded to follow Driftwood’s instructions and soon they were back on the shore where the father had come to.

Crying, he got up and hugged his son. They stood in their embrace for a few moments, rain and wind whipping them, waves crashing violently a few meters away.

Driftwood started walking on the wet beach back to his cave when he heard the man scream over the sound of the storm.

“You saved him! You saved us! Gods bless you. You are a hero. Would you like to get out of the rain?”

“I don’t mind it” answered the Genesis, not catching the invitation.

“Come to our house, have a warm meal!” cried the teenager. “Please!”

The genasi accepted the invitation and followed the weak but alive pair back to their humble home on the outskirts of the nearby village that Driftwood had always avoided. 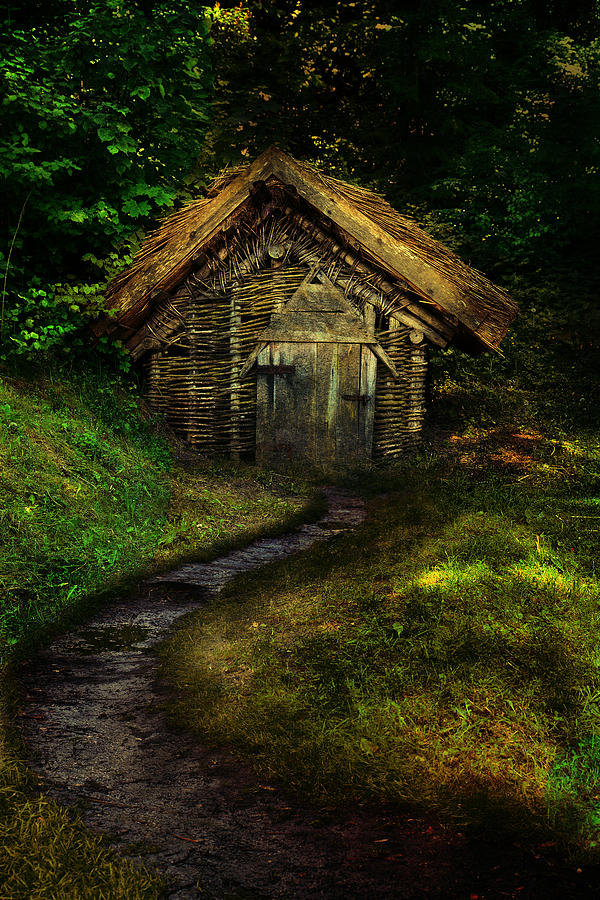 Old Fisherman Hut in the forrest
by Jaroslaw Blaminsky

Inside, out of the rain and by the light of an oil lamp the pair got a better look at their savior and saw that Driftwood’s skin was a blue-ish green. His hair was dark green and looked like seaweed. His eyes were larger than usual and pitch-black.

Driftwood looked at the door, considered running out. He felt very awkward. It was the first time he could remember being in a house, with right angles, straight furniture, and a dry floor (except for where they were all dripping down, still wet from the storm outside).

The man caught the glimpse to the door and hands up, tried to rectify himself.

“It’s okay lad, you saved us. I don’t mind you being different than us. Say, have you ever had wine with a friend?”

And with this, the father and the druid sat at the small wooden table while the teenager dried himself in the bedroom. The fisherman never left the table and conversed with the genasi all night. Driftwood felt strange at first, exposed, but this weird liquid soon made him feel warm inside and let him talk more and more freely. The trio laughed, ate, and talked until morning.

A few days later, back on the fateful shore as Driftwood was walking out of the water munching on some fresh seaweed, he was surprised to see a commotion in the distance. A small crowd was walking in a line down the small beaten path that led from the village to the beach. Everyone was dressed in white, carrying flowers. He could hear music. The sun was glaring.

A small figure detached itself from the group and came running down ahead of everyone else. It was the teenager.

“Driftwood!” he yelled. “We just want to say thank you!”

The water genasi, his body made strong from the constant swimming and diving, stood immobile, his long wet hair hanging heavily over his broad shoulders and down his ripped chest and back. His feet were still in the water of the last rolls of the waves breaking ashore. If things turned sour, he could always dive back in the ocean.

But nothing sour happened. The group slowly came down on the beach under the warm summer sun and handed Driftwood flowers and thanks. They gave him food, wine, clothes, and a diver’s spear. They sang songs in his name, songs for the gods, songs to the sea. He dove back in the water for a while and came back with fish, which they roasted on a fire. They laughed, and they left.

From that day on, Driftwood’s routine changed slightly. He no longer felt alone. A few mornings a week he could find some offerings on the beach, weather permitting. Some small tokens of comfort that he used to decorate his coastal cave. A mirror, a comb, soap, cutlery, flint and steel. Small commodities to improve everyday life.

Soon, small carved statues made in his image started appearing along the regular offerings. Driftwood liked this and started carving the driftwood he found on the beach. He slowly realized that his name had a significance.

One year passed. On the day of the anniversary of the rescue, the villagers came down to the beach again to celebrate him. They held a modest feast and were carrying a bigger wooden statue which they set down on the beach. They confessed that they now prayed for him alongside the sea gods when times were rough. Driftwood felt humble. He was enjoying life more and more.

Further inland, in his keep, the lord of the micro-kingdom to which the fishermen village belonged to, fumed. Out on his stony balcony, he stared out towards the sea, clutching in his right hand a small piece of carved wood. A strange humanoid, in HIS kingdom, was gathering followers for the sea god. Ridiculous! Insulting! After all, the lord was a devout follower of a different deity and raised money in its name. Necessary taxes to build a temple and bring good fortune to his kingdom. He couldn’t risk… competition! Sedition! Betrayal!

Angry, he walked back into his lavish office. He barked orders at his captain of the guards: to find that strange man, follower of false gods, and kill him.

And this is where his adventure starts. After narrowingly escaping the assassination attempt, Driftwood left most of his belongings behind and tried to put as much distance between him and the killer on his tail. He didn’t know if the hired man would give up after a certain distance but he had no choice and so he set off, following the coast.