Last week I managed to find a board game café with a private room, and my players and I feeling secure given the pandemic, decided to meet at that café on Saturday morning as usual to go back to our imaginary world, aiming for a 3-hour session this time around.

After a short nap during which our uprooter adventurers rested and regained a bit of their strength, they decided to explore the small house in which they had taken refuge.

The halberdier found another wooden door and opened it, finding himself in a small living room. Always, abandoned. Always, the footprint of time left its faint dust on all things. A small couch, a few chairs, a coffee table. Wide windows, opened to the main street. This didn’t seem to unnerve the man, as he walked in and found a ladder leading to the 2nd floor in a corner of the small room.

The machiavellian rogue all the while, was trying to gain the mother’s trust, for later amusement. It would have worked as well, if not for the sorcerer openly stating that he wished the mother was dead so that he could adopt her children. Hearing this, the mother decided with reason to never let her children out of her sight, as she gathered them and brought them in the room with the halberdier who seemed the most trustworthy.

The rogue and the sorcerer, always at each other’s trust, couldn’t find common ground on how to dispose of the mother and the gallant warrior. Ninetails, always curious, decided to climb the ladder and explore the second floor. All he found was a bedroom that seemed to have been used by a small family as it contained a large bed, three small single beds, and a chest full of wooden toys. Seeing this, he found another way to manipulate the mother, as he convinced her to bring her children upstairs so they could play with the toys and feel a bit of joy, for a short time.

Mostly, he wanted to be near the woman, so that he could sow his weeds of trickery in peace.

Meanwhile, on the ground floor, the sorcerer Nhat and the fighter Tuan were watching for signs of the strange warriors who had attacked them, when came strolling in the middle of the street an oversized boar.

The beast was twice as tall and fat as a regular boar, with sharp tusks and a wary eye. It walked slowly forward, all the while sniffing the ground. It didn’t notice the two bipeds staring at it from inside the stone house. Its greying coat gave it a strange air of pride and wisdom (compared to a regular boar, that is).

The sorcerer, bored, decided to open the window and walk out on the street to try and talk to the boar. Calling it gently, it successfully befriended the beast, both of them talking in Sylvan of how they came to be here.

Ninetails learned that the boar’s name was Garump the Great! and that it had arrived in this strange city a few moons ago. It had a few tussles with the dog-biters, proudly showing his scars from their claw weapons, and was also aware of another village North where the two-legs there shot arrows at him but did not pursue him.

Hearing of this, the sorcerer peeked back in the house to let his companions know of what he learned. He was interested in the village, mainly in taking control of it. His accomplices warily stepped out into the sunlight, wondering why and how the hell someone could befriend this oversized beast and also, stand in the middle of a street when there are clearly dangerous things roaming about. After a quick talk, everyone agreed to at least go scout out the village.

The mother and her children were put on the back of Garump who found it quite amusing and compared himself to a proud warhorse. The boar guided them along the narrow, windy cobblestone streets confidently while the rogue used his Whisper Elf senses to protect their rear. He did notice that someone – or something – was following them on the rooftops.

They shortly reached a city square where the ground was made of large white stones, immaculately set. At each corner stood a stone statue of an angel, holding a musical instrument. In the center of the large square stood a beautiful church, of white stone and red roofing, with a large tree growing very close to its southern walls, its red leaves gently swaying in the wind and spread about on the stone floor.

The church was divided in three main parts. A left and a right wing, long and slightly angled and separated by a bell tower. The companions picked the lock to the left wing and pushed the massive wooden doors to peer inside. Seeing that it was quiet and empty, they stepped in. They were welcome by high ceilings, rows of benches, and glass window paintings depicting various religious scenes. One of the windows was broken, a branch from the large tree outside poking in the building. By the far wall, on a small stone platform stood the marble statue of a woman draped in green cloth, holding a bow and arrow, with various critter animals standing at her feet.

She was identified as Ketephys, the goddess of hunting. The boar was quite pleased to see her and feeling relaxed, promptly fell asleep in front of the statue.

“Strange, I remember that deity as a man”, said one of the comrades.

By each bench was a wooden chest. The halberdier very carefully with the help of his weapon, lifted each chest’s cover to reveal the content. The heroes found bread, cups of wine, mushrooms, arrows, herbs. The halberdier sampled each type of food and everyone had a cup of wine and some mushrooms, except the sorcerer.

The last chest contained… a hawk! The bird could speak common and immediately started serving the halberdier who ordered it to go and scout out the city for a way out.

The rogue and the halberdier explored the rest of the church. The second wing had been broken into and vandalized and they dared not step in. They then climbed the 4 floors of the bell tower to get a view of the city. 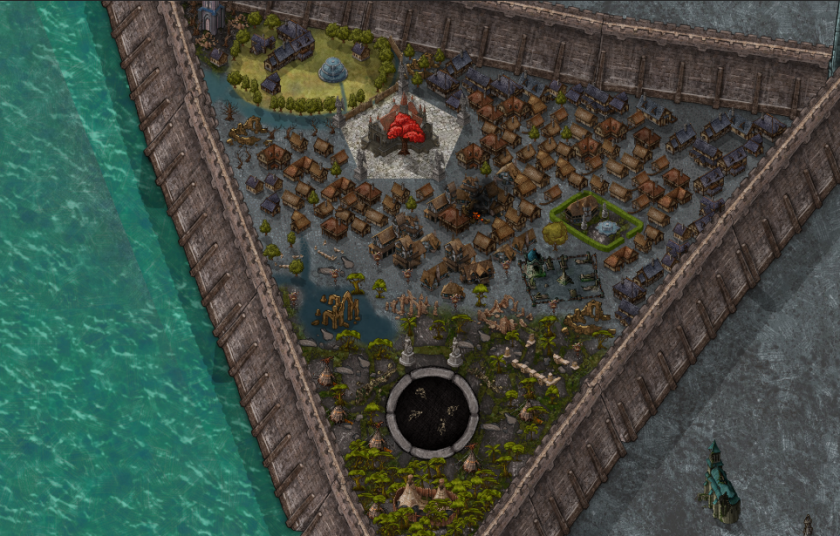 What they saw made their hearts sink: completely surrounding the city were giant stone walls, blocking any exit or entry to the city and making elongated shadows, slowly creeping over the sea of rooftops as the sun was setting.

The rogue noticed something, down in the courtyard.

20 individuals were rapidly moving towards the church. Then, the biggest, largest man Ninetails had ever seen started yelling.

Feeling their muscles tense up at the immediate danger, the two heroes reacted immediately by loosing an arrow and shooting a shuriken at the closest man approaching, hitting him once but not killing him. Then Ninetales the rogue ran downstairs, back to the ground floor to warn the sorcerer. The boar promptly woke up and sniffing the air loudly, proclaimed “They’re here! So many of them! The scratchers! Oh, why did I follow you in this stone cage?”

The boar ran to the heavy doors who had been closed and locked previously and found that he couldn’t open the doors or smashed through them, so it took a defensive position between the two rows of benches, ready to charge whoever was unfortunate enough to be the first through the doors.

The sorcerer ordered the mother and her two children to hide under the benches as he took position at the top of the platform. The halberdier, still at the bell tower, loosed another arrow, aiming for the grotesquely big man who seemed to be the leader, down below. His arrow flew swiftly and the fighter now felt a tingling sensation as the mushrooms he ate earlier started kicking in. They let him see in the dark!

The arrow would have hit the big man square in the chest if he had not swatted it out of the way like a fly. The projectile did draw blood, however, which seemed to excite the man who started laughing in excitement. Using his massive strength, he tore a large white stone from the ground and threw it at the bell tower! The stone missed the halberdier narrowly but destroyed one of the pillars holding the roof of the tower. Feeling like a sitting duck on this platform, the halberdier quickly joined his companions on the ground floor, where the battle was about to truly begin.

And what a battle it was. The first hit came from the sorcerer, who shot magical ice at one of the scrappers foolish enough to show himself first, perched on the tree branch that passed through the gaping window.

The other glass windows shattered one by one as the warriors outside pelted them with rocks, then climbed through with help as the windows were 8 feet high off the ground.

The first warrior dropped from the tree branch, only to be instantly finished by Ninetales’ rapier who was waiting in ambush. Whenever a warrior would pass through the window, he would be met with an acid splash and swift dagger strikes, but they soon became too many to be contained.

On the north side of the building, the strange warriors also pressed the attack but were met by the halberdier who was swinging wildly from the top of a bench, sometimes hitting his mark and thus cutting his target in half in broad strokes.

The boar had been eyeing the main doors. From behind them, a loud laugh was heard. The leader of the gang was clearly amused.

“Strange warriors from another land! I have an offer! I could use you in my ranks! I’ll order my men to stop their assault if you join us! We have food! We have water! We have violence! We are the Dog-Biters!”

“How many dogs can I bite?”

“How many dogs can I bite when I’m in your gang?”

“Not enough!” proclaimed the fighter, as he resumed his attack on the intruders.

The battle continued, with the sorcerer alternating between acid splashed, spear thrusts and shockwaves, the rogue double-feinting his opponents looking for an opening, and the fighter using his halberd in wide arcs, keeping enemies at bay.

Finally, the doors broke down and the grotesquely large man stepped in the church. At that moment, the boar charged. However, the man was able to stop him and began wrestling it.

“Grab them!” he ordered his scrappers.

And so they did. One by one, outnumbered, the companions were grabbed, wrestled, immobilized. The boar, becoming more and more agitated, remembered the mother and children who had not been found yet. It was able to knock itself free and peered at the humans with blood-shot eyes.

“I’ll let you go so we can fight another day, great beast!” bellowed the big leader.

“Don’t harm them, and we have a deal” replied the boar.

“Deal! They’ll be great entertainment in… THE COLOSSEUM!”

And with this, the boar was allowed to run away, out of the church and into the winding streets. Even with a great beastly body, everyone could feel its sense of shame and knew it would be back for revenge.

The three estranged adventurers were disarmed, tied up, and brought out of the church.

The mother and her children were not found.

This is where we stopped our session. I hope you enjoyed reading it!

My Betta NEVER goes in any cave or shelter I've given him in the past, so I was surprised to see him there.
The start of a heavy but short shower here in HCMC
Fighting lockdown boredom with shiny toy