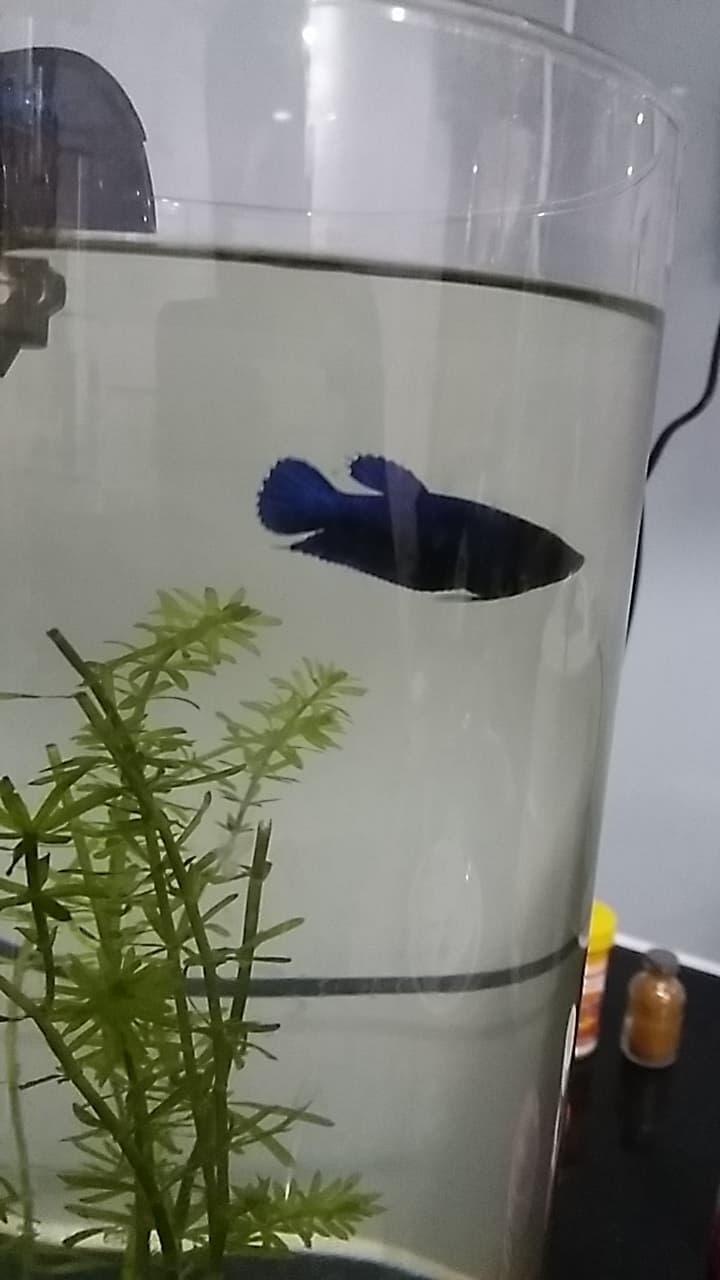 It is now clear that I have a problem with getting over-excited.

Some people wouldn’t call it a problem, but when it leads to taking rapid decisions without consulting the person you share your life with, it can become an issue.

Anyways. The vase mentioned in the previous post turned out to be like a hit of heroin. I got hooked to aquariums again and couldn’t stop myself from starting to visit all the tiny fish stores that dot the streets of HCMC and that in 4 years in this city, I hadn’t even noticed until my friend Adam took me to a few in our neighborhood.

In less than a month, the vase has seen tumultuous activity. When I first bought it I got hold of an ammonia test kit and tested the water – the results showed it was okay for fish.

To be honest, to carry the vase by motorbike from the store to my home, I had to remove 50% of the water. Also, the test kit was second-hand and its results may have been faulty.

Following the “good” news of the right water conditions, I headed to a store that has become my favorite fish store in HCMC (more like a dude whose hobby became his life) and purchased 3 fish and 2 snails.

Here’s what happened to the poor beasts. And for people with a sensitive heart and a judgemental character: yes, I feel terrible about every death.

Well, good news first is that the big black snail, Đen, is alive and well. He only crawled out of the vase once. I found him on the floor one morning and put him back in the water and he’s been slowly licking every available millimeter of his habitat ever since.

His white counterpart, sữa, was not so lucky nor smart. It crawled out of the tank several times, each time falling from 3 feet high which it started damaging its shell, to the point where it couldn’t “close” it fully anymore. I found it dead at the bottom of the tank one morning. I felt like an irresponsible owner.

Although, before it perished, it proceeded to couple relentlessly with Đen to the point where I had an outbreak of close to 20 snail-babies crawling around, with several more egg-pouches stuck to the vase’s plant.

At the same time, one of the fish had babies, so I found myself with 10 adorable little baby fish swimming around, hiding in the plant, looking for pieces of food small enough for them to consume.

Some time after the white snail perished, I was feeding the three fish that co-habited awkwardly together. I say awkwardly because I realized a second after putting the fish in that the area of available surface water is very important for the fish – especially when it’s time to feed – and the vase offered very little of that.

In a moment of poor judgment, I decided to touch delicately two of the fish who were busy eating. I mean, I barely touched the top of their head. I was just curious. They didn’t even seem to notice.

However, maybe an hour later, one of the fish had died. I felt terrible. I flushed it down the toilet, apologizing profusely.

The next morning, I found a second fish dead. I decided to do a big water change and try to clean the gravel a bit. I was clearly over-feeding everyone. Moving the gravel around disturbed some locked bacteria and in the afternoon I saw that all the baby snails were slowly crawling out of the tank. I knew I fucked up, yet again. The sign was ominous.

I came home from work that evening to find the vase in a bacterial bloom: the entire water was cloudy white. I was worried. However, about an hour later the water was back to normal.

A few days later, the last of the original fish died. I bought new test kits and found that the vase was going through an ammonia spike. It was restarting the bacterial cycle… or had it ever been through it at all?

Somehow, most of the fry survived, and Đen the black snail didn’t seem to mind the cycle at all. I kept feeding the babies and waited patiently, doing small water changes every weekend. When the nitrate levels stabilized, I went for a drive to a tiny fish store in my neighborhood and got a cory (to eat the snail eggs and help with eating waste) and a beautiful female betta.

At that point, only 4 fry were left. The betta didn’t seem to mind them at first but we’re a week later and there’s now only 1 baby left. I only have my own stupid self to blame. The last surviving fry is basically constantly at the opposite side of the tank compared to the betta.

The betta looks happy. The vase is at least 4 times bigger than its previous tank. The cory seemed NOT a happy campe as It swims up and down frantically all day, all night, constantly, unless I put some algea discs for it to eat. I googled his behavior and several owner fish keepers have written that cories just seem to like doing that. They like to play around and are kind of dum-dums.

As soon as the new tank (the beast) is done its cycle, I’ll move the cory in it and give it a few new friends.

This post is already getting long, so, more on “the beast” in a future post (or video). 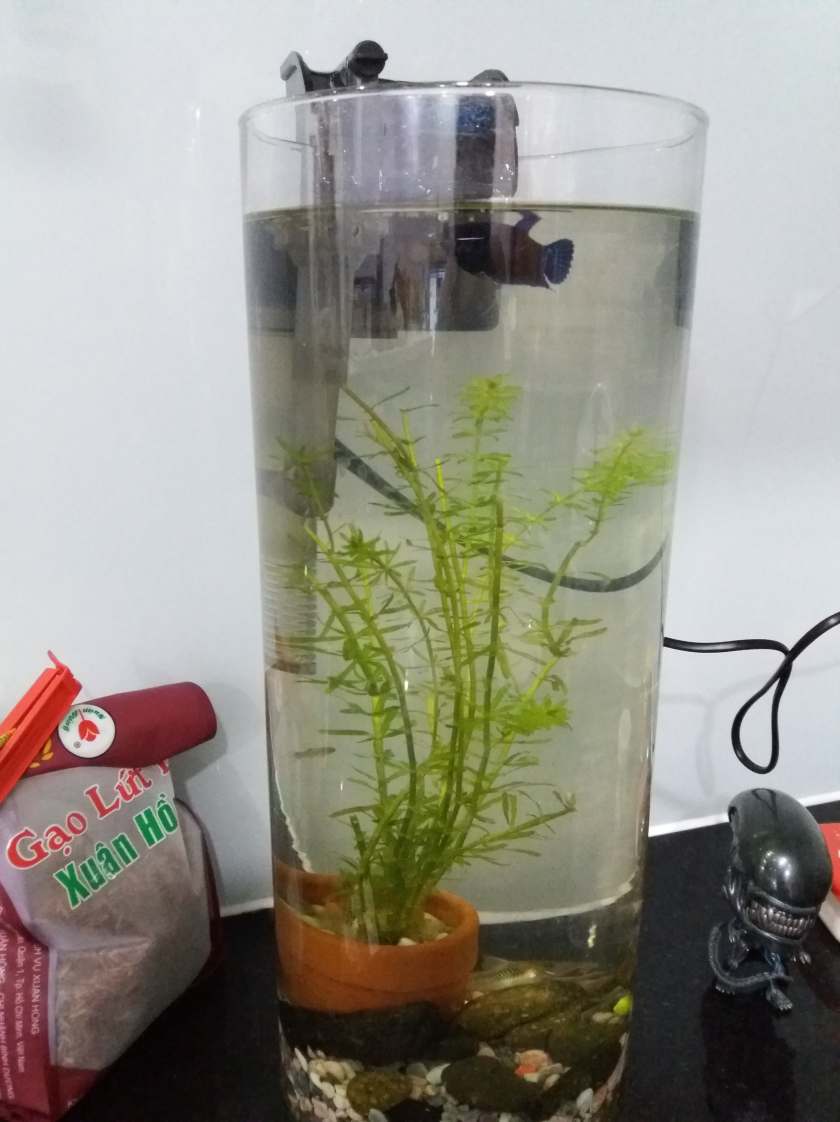 The pool of English-speaking GMs is pretty small in Vietnam and so I have usually been doing the GMing in my playgroup.
Hey PJ's I'd like to inform you that the factory that made your t-shirts let a few fall off the supply chain and made like 50 cents in profit by selling you t-shirts at the wet market.