After a few months off, three players and the DM were able to find a suitable timeslot to return to King’s River and continue building a story together.

To save time and after consulting the players, the DM decided to move time forward. Refer to the “Prologue” section for more details.

Étienne Bureau, the DM. Lazy world-builder who likes to set foundations but let his players add some details to the world. Getting more comfortable improvising and role-playing.

Jesse, as Muwafiz. In his words: Druid Satyr that I decided last minute is like 7 feet tall but hunched down to a normal-ish height. Frequently bleats. By today’s standards he’d be considered an alcoholic, but he prefers to think of himself as a Wine Appreciator and follower of Sylvanus.

Étienne Forest, as Thibalt. A Thiefling Warlock with a chip on his shoulder and often at odds with Gaotl, he showed a glimpse of goodness when he accepted to go back to the jungle temple to rescue the captured Barbarian.

Paul, as ? A Dwarf Druid. Paul is relatively new to D&D and is often quiet but never shies when it’s time to share valuable insight.

Worried about being lost in the bamboo forest, the group of heroes were growing more and more worried about eventually finding their way out of this place, infested with ebony Lizardmen and Goblins, dinosaurs, monkeys and the mystical and elusive Elves.

Uz decided to separate from the group in order to cover more ground. Paul Druid woke up from the tranquilizer darts afterwards and guided the group safely out of the bamboo forest. However while the group was preoccupied with potential dangers, they didn’t notice that Thibalt ditched them, disappearing with the eggs and betraying his companions.

Following the edge of the forest South, the group made it back to The Green Coconut tavern where they dropped off the Barbarian Gaotl (previously played by Jesse) who requested to not be healed by magic in order to let his body heal more naturally, allowing him to get “sweet scars”.

Chapter 1 – A meeting of magicians

Walking the King’s Road Southwards back to King’s River, the duo of Druids Mufawiz and Paul arrived at the Northern city gates near the middle of the afternoon. However, a familiar figure was waiting for them on the dry, sandy road.

The druids, aware of his hot temper, confronted him. Why did he ditch them? Why did he disappear without a word? Thibalt only smirked. Playing with his spells, he magically mended his armor and played with the druids emotions, telling them he was intending on keeping the eggs as the duo wasn’t part of the original deal.

Suddenly, Thibalt started to cast the Invisibility spell. As a reaction Paul cast Gust of Wind to attempt to both distract the Warlock, making him lose concentration, and to cover him in sand, making him easier to track.

However, Thibalt simply shimmered, still visible. Muwafiz sprinted forward to attempt to grab the Tiefling but his hand passed through its body. At this point, the projection of Thibalt disappeared.

A charismatic laugh was heard from the side of the road. A stranger walked up to the confused pair, complimenting them on their course of action. “I believed you’re looking for this?” he said, as he handed them the bag of dinosaur eggs that Thibalt had stolen.

The wizard’s robes were really burned. As the two druids stared at him, puzzled, he explained that he was already looking for Thibalt, as there was a bounty on his head for the attack on the old lady (back in the very first session). He ran into a bragging Thibalt in the city and managed to subdue him. He gave him up to the guards but kept the eggs, intent on giving them to the people Thibalt had stolen them from.

Thibalt escaped jail within a day.

The people of King’s River can be quite superstitious. It’s not every day you see a 7-foot tall goat-man walk up to you, and so the city guards wouldn’t let a Satyr walk into the city. Jake the Wizard tried to charm one of them but failed. Now definitely sure that the strange trio was up to no good, the guards menacingly barred them from entering the city.

Walking a short distance away, Muf the Satyr decided to shape-shift into a squirrel and simply perch himself on Jake’s shoulder. They crossed the river and walked along the North wall, eventually entering King’s River by the west gate, under the creepy approach of stormy clouds.

Jake the illusionist grew up in King’s River, so he knew the city really well. After passing the gates, the party decided to head to The Honey Pot, the friendliest tavern on the West bank of King’s River – the poorer side of town – to rent a room for the night, hide the dinosaur eggs in their room and then go looking for a potential buyer of their contraband.

After doing so, they went looking for “The Hideout” – an infamous tavern where the shadier individuals of King’s River like to meet – but got lost in the labyrinthine slums of the city, where they eventually met a dead-end.

An 8-foot stone wall blocked their path. On each of their sides was two-story high stone houses in a poor, degrading state. Just over the wall in the distance, they could see the three-story high tavern of cutthroats. Suddenly, they heard a cat meow.

Spinning on their heels, the three heroes spotted three raggedy-looking men who had been trying to sneak up on them. The leader of the crew had accidently stepped on the feline’s tail, revealing their position. Keeping face, the clumsy, skinny man demanded that lost trio hand over their coins (Jake being a noble, looked especially out of place in these slums).

Not losing a beat, the heroes attempted to use their wits to get out of this sticky situation. Mufawiz theatrically lowered his hood to reveal his Satyr features in an attempt to scare off the assailants and one of them promptly ran off. Jake used a “Message” spell to whisper in the ear of the other acolyte which worked and sent him running as well.

They easily disposed of the miscreants. They heard three hand claps, muffled by leather. Perched on the wall, a woman was staring at them and spoke.
“If you can make it to The Hideout while still dry, I might have some use for you – if you’re looking for work”. 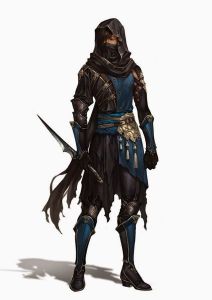 “If we’re still dry?” Paul thought. Looking up to the sky, he noticed that dark, ominous clouds were rapidly approaching. 20 minutes at most, if they hurried. “Ah, that’s what she meant”.

Since Jack had been levitating, he was able to see the proper way to navigate the snaking alleys and the trio made it through the door of The Hideout just as the first monsoon rains of the season started.

The wooden door slammed behind them and the loud noises of multiple conversations that could be heard from outside all went quiet. An entire room of rough-looking individuals, some wearing in black-and-blue cloaks, were staring at them silently.

The out-of-place trio decided to ask the bartender a few questions and after a bit of bribe they were finally able to gather some information as to who exactly they could sell the dinosaur eggs to (all the characters who originally knew the contact were absent).

They were instructed to go back out in the rain and meet with the local Thieves Guild contact in an alley opposite the tavern in the next few minutes. Meeting with the shady individual, they realized it was the same hooded woman who had been watching them fight earlier. Following a few minutes of pourparler they decided to take her back to the inn where they hid the eggs and strike up a deal with her: They would her a dinosaur egg at full price, and the second one at a discounted price if they could meet with the boss of the Thieves’ Guild – to which she replied that she’s very doubtful this could happen.

Before she left, the heroes asked her what did she mean when she said that “she might have use for them”. She revealed that she’s not that young anymore and need to be more careful, but that if the trio ever hears any rumors or gathers info about children who have been missing by the river for the last few decades, she would be forever grateful.

After she left, the heroes discussed a bit more about what to do with the remaining egg. They gathered that if they are to stand a chance against the ebony lizardmen and the threat of a black dragon they need allies – and so far the citizens of King’s River have not believed them.

One plan is to give the dinosaur egg to a tribe of orcs in the hopes of building a relationship with them – the enemy of my enemy is my friend.

I hope you enjoyed this post. Due to the fact that I don’t really enjoy writing these posts, they are time-consuming and barely get any views, I will be switching to a bullet-point format in the future, simply to have them here as a memory-aid for my players and I.

Watch yoself Eminem, there is a new rap God.
Just re-watched this genius at work for the first time.
#animalcrossing