This is a dystopian sci-fi flick that came to me by recommendation of a friend and student. Having seen the poster and heard only minimal details about it, turns out I was left wondering how this had evaded my sensors.

Alita Battle Angel is, first and foremost, based on a Japanese manga of basically the same name. I’ll get into the Hollywoodization of this in a bit, but suffice it to say if the studio’s intention was to bring something pioneered by Japanese imagination to an American audience (that is, a super powered cyborg heroine pit against other super powered cyborgs with often little more than her fists or a sword), then I feel they succeeded.

I had fun watching this film. While no stranger to anime, and a number of tropes that either keep me coming back to it or otherwise make it impossible to defend, Alita took some getting used to, visually speaking.

The titular character has over-sized anime eyes, which are not explained (nor does anyone make any remarks, as everyone else has normal-sized eyeballs in their heads). The stylistic choice works just fine for the traditionally animated medium and, to some extent, CGI-rendered movies, but for hyper-realism I can see people looking at this and being put off by it.

After all, at 33, I’ve lived through the likes of Beowulf and The Polar Express, films I’ve heard affected folks quite badly. The first Toy Story and, by unfair comparison, Mario 64, did not age that well from a purely visual point. 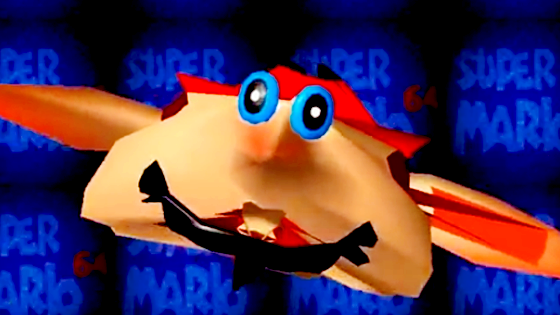 And yet Alita Battle Angel had me, for the first time in my life as a casual (if critical) consumer, actually forget that the movie’s namesake was a fully-rendered computer animated mesh. From her eyes to her mouth, my suspension of disbelief was successfully held. As a longtime fan of animation, traditional, computer-generated or otherwise, it took me some days to realize this even happened.

I am endlessly fascinated by the concept of the Uncanny Valley.

Much like in Vietnamese movie I saw not so long ago, Hai Phuong, the movie’s plot takes considerable time establishing the power and willfulness of the main character. Alita is established to be about as badass as they come, and for some time she is kicking ass again and again – until we meet a foe who makes short work of her.

This is a very basic scheme, but when it is done well, the effect is impactful.

Alita Battle Angel is a visual spectacle, even if your focus wanders away from her massive eyeballs. It feels rushed in some scenes, and others drag on. Almost like the script had been adapted from massive source material and they ended up having to pick and choose what to fit into a movie.

This guy, Zapan, was a lot of fun to hate.

The romance felt a bit forced. From the moment Hugo (Yugo in the manga) is introduced, you know immediately that this boy’s purpose in the story is to teach the cyborg girl Alita (who possesses a “very real human brain,”) about love.

There’s a bit of Pinnochio plot in the beginning that I’m glad they glazed over. It’s cute to see an adult (?) experience chocolate for the first time, after being “alive” for only a day or two. It’s also good to see that they skipped a lot of the naivete that often comes with these stories, and that Alita, despite having no memories, does possess wits enough to figure things out, rather than spend half a movie teaching her how to know right and wrong. She’s also very active, eager to try new things which is great for plot forward-motion.

Perhaps my impressions come from watching Metropolis (2nd viewing) not so long ago, and I’ve decided I’m thoroughly bored with the “mute amnesiac with the super powers” trope. Having not read Gunm (the original name for the manga on which Alita Battle Angel is based), I can only guess whether that trope was played out in the 90s comic.

This movie carries on with the assumption that you, the viewer, are either familiar with the potential of cybernetics to some degree, or that you won’t really ask questions. A severed head being transplanted upon a fully robotic body, due to the efforts of a brilliant cybersurgeon (and there are more than one), or someone’s brain being segmented into little more than gray matter, a mouth, and eyes while hooked up and suspended in jars, a dude getting a section of his face sliced off—

You know, I couldn’t tell whom this movie targeted. Perhaps I’m becoming an old fogie and can’t keep up like I used to. There are some decidedly Young Adult themes happening here, and also scenes that are surprisingly, even disturbingly violent (re: face sliced off), yet a moment of pounding someone’s skull in with fists is censored. They drop an F-Bomb in a powerful moment, which was preceded by the censored killing of a small dog. Then, after being transplanted into a new Berserker body, there’s this contrived teen-scene where Hugo and Alita kiss in the rain.

Was that before or after Hugo’s close friend got cut in fucking half?

It’s not that I took personal issue with being shown these things; I’ve enjoyed my share of violent horror and harsh words, sometimes in the same movie (*cough* Tarantino). I just wasn’t sure who was expected to watch this.

At PG-13, I guess the answer is just about anyone who can get themselves to a theater. 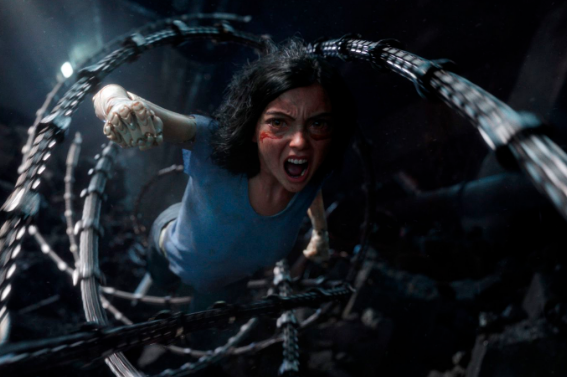 Eh, but seriously, who am I to judge? I made it a point to watch things the adults didn’t want me to see every chance I got. I can tell you one thing, if I had seen this movie as a teen, I might’ve lost my godsdamn mind. When the sequel rolls around I won’t miss it.

Besides, there’s no shortage of anime geared towards “young adults” with arguably worse things being depicted. For all I know, the original manga actually showed the death of that little dog.

And I may never have been able to get over it.