This is a reaction post to a youtube video which you can find here. Go watch Tim’s video and feed him views, he makes good stuff!

This video used Game of Thrones and Vikings to illustrate the concept of killing off your main character in writing. I think this is a valuable thing and I learned a bit from this clip, perhaps you can too!

Quick aside. The opening themes for both of these themes are boss.

The Vikings opening evokes an emotion in me that I don’t feel often, which I can describe only as metal. I feel a little more ruthless, oddly comforted in our godless universe, where the only thing that truly matters is mankind’s resolve and our will to decide our future.

The opening theme of Game of Thrones, at least until recently, inspired wonder and awe and anticipation for the unfolding of political intrigue.

We shall look at Ragnar Lothbrok (or Lodbrok, an actual historical figure) the Vikings show supposedly had historians on the credits like rabbis making sure the product is Kosher ~ who is without question the central character for the first few seasons.

We shall also look at Eddard “Ned” Stark of Game of Thrones fame, the only character in history played by Sean Bean who gets double-crossed (rather than him being the double-crosser). 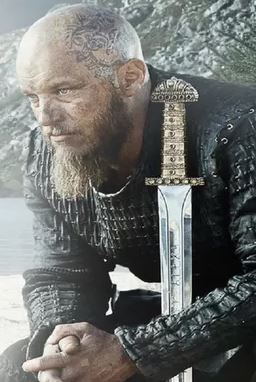 So in the YouTube clip, it’s established that both these characters aren’t the only protagonists in either story, but for the duration of their camera-time, they’re certainly the primary protagonists. This is determined not especially by the fact that the camera is focused mostly on them, rather, it has to do more with each of these characters making decisions that drive the plot forward.

Both Ragnar and Ned are active people who’s choices affect the story. That’s why we’re watching them, yea?

This is also why passive (not to be confused with defensive) characters don’t always make for compelling – much less exciting – protagonists. There are exceptions to the rule. There must always be. Rincewind of Discworld, at least in the criminally few Terry Pratchett books I’ve read, is depicted constantly trying to do the opposite of heroism and run away from problems. Another might be Dante Hicks, the main guy from Clerks (“I’m not even supposed to BE here today!”). I’ve admittedly not seen that film in some time, but if memory serves, Dante is more the character that has stuff happen to him, rather than the guy who makes stuff happen.

As far as I know, though, neither Dante nor Rincewind died, and in both cases, they’re comical characters. The respective deaths of Ragnar and Ned don’t serve as endings to stories, but rather the beginnings of bigger ones.

I could not help but wonder about Harry Potter while watching this clip, and listening the points made by Tim, the video’s creator. In that series, characters die (gasp), but not Potter himself. There’s a moment near the end where we’re expected to think he could have died, but I don’t really think it fooled anyone paying attention. But, Voldemort fell for it, and that’s enough for me. Rather, I’m talking about a specific thing Tim mentions in the clip:

The more time spent with a character, the more impactful their death.

Makes sense. When Fred (one of the red-haired twins) perished, it was impactful; they’d survived the entire series up to that point. Still, while not main characters, they were there, and present, and meaningful, enough so that their absence is felt as much by the characters as the readers.

Compare that with the opening scene of Game of Thrones, Ep01 S01, where we first empathize with a dude who gets his head cut off in the next scene. This is effective use of death as well as effective foreshadowing. The subversion of plot armor, manifested in Ned Stark’s execution with his own sword, tells volumes.

The waves that echoed across the land when the great honorable Ned Stark was executed for treason opened the story up to a much larger, tangled plot.

There really aren’t a whole lot of mainstream stories that depict heroic final deaths (as opposed to false deaths) of the main characters. Sure it can be found, but it’s not a common theme. Otherwise, Ned’s death wouldn’t be subversion. People naturally root for the hero and don’t usually want them to die, because if the character is effective, the audience will be sympathetic.

Anyway, that’s in part what I took away from this: more time spent with a character = more impact of their death, but that doesn’t necessarily mean “only ever have them die at the end.”

It just means there’s a lot to consider if you’re going to kill a character, especially your main character.

So, let us take a moment to thank the Episode 1 Executee.

The pool of English-speaking GMs is pretty small in Vietnam and so I have usually been doing the GMing in my playgroup.
Hey PJ's I'd like to inform you that the factory that made your t-shirts let a few fall off the supply chain and made like 50 cents in profit by selling you t-shirts at the wet market.