The cast for this episode is: Leo, the Minotaur Barbarian (Thach).

I didn’t want to lose time finding a reason why Leo suddenly teleported to lost heroes in a gigantic bamboo forest, so I just retconned that he had also been sleep-poisoned the whole time.

This episode of King’s River started fast. Time was of the essence. Tibalt ran as hard as he could, back to the campfire where he found Uz, who had finally recuperated from the poison. Ulrich the Dwar Monk had vanished, and so did Frang the Halfling Druid.

A quick talk between Uz and Tibalt established the importance of the situation, with Uz questioning why exactly he should be concerned with Gaotl. While the pair was arguing, a bleating sound startled them. A curious sight greeted them: a speaking goat-man was approaching. Soon enough though, Uz recognized Muwafi, a druid he hadn’t seen in ages.

Luckily, Muwafi knew of the temple where Gaotl was now being held. It gave him the spooks. He offered to help the party since he didn’t like the obsidian lizardmen’s presence in the jungle. He also had rainwater potions for everyone, which, when drank, counted as a long rest (plot device, let’s keep moving folks).

The group of four agreed to mount a rescue mission for the lovable Gaotl and, following Muwafi, carefully hicked back to the temple where the signs of the previous battle were still fresh.

Worried about being outnumbered, the heroes devised a plan to lure the enemy out and hopefully pick them out one by one. The Ranger snuck to the outskirts of the plaza and using Minor Illusions, replicated the sounds of war drums that the evil bards were using.

I was playing this last session as the bard’s music and it sure installed a great ambiance, so I played it again, sometimes raising the volume, sometimes lowering it – eventually turning it off when the illusion was done).

Three Lizardmen guards were lured out and the forces of (barely) good made short work of the first one, who rolled down the temple stairs unceremoniously. The two others retreated back to the safety of their ancient temple.

Black Lizardmen (mine are armed with spears)

The rescue party ventured in the temple, which was filled with the refuse of the jungle: dead leaves, growing vines, giant roots, insects. At the back of the room was a small ceremonial cleansing pool, still filled with water. The barbarian Leo went to investigate and immediately saw two pairs of eyes staring at him from underwater: the two lizardmen were crouching and ready to pounce!
(Thank you Redditor for this idea)

And pounce they did! Erupting from the water, they threw their spears at the barbarian and then attacked him furiously. The warlock had readied his spells however and attempted to blast them out of thin air, which didn’t work.

The party proceeded to make short work of them, with the druid electrocuting both of them repeatedly. Unfortunately this had the effect of making a terribly loud noise that alerted whatever else was in the temple, and the druid’s war drums were heard in the distance, giving a moral boost to the lizardmen cultists. It is at this moment, while the party was distracted, that another lizardman, armed and armored this one, decided to act: He entered the temple and attacked Tibalt, who had shamed him last episode.

Decided he had no time for this, Tibalt decided to Command him to leave again, which worked a second time. The Lizardman captain ran away in the jungle and wasn’t seen again.

The small lizardmen cultists slaughtered, the group searched the room and found 3 corridors. They managed to pick the one that would take them straight to the second floor. They carelessly threaded forward and a stone door almost killed Uz, by collapsing on him after being triggered.

After this, the party proceeded carefully.

On the second floor, the drumming intensified. The party stumbled upon a room covered in insects but the Warlock made short work of them, burning them all down and taking care not to inhale any fumes.

Leo decided to kick the next door in despite the potential threat of traps, which surprised the two cultists and the two bards, who were in a trance. The heroes capitalized on their surprise round but it wasn’t enough and the evil lizardmen replied in kind.

The two cultists, still sporting the burn scars of the previous encounter, dashed at Leo, pinning him down and biting him, pummeling him with their tails and bringing him to the edge of death’s ravine.

That’s when the druid decided to act. Polymorphed into a raptor, he made short work of one of the cultists, saving the barbarian’s life who was now pinned down with Hideous Laughter.

One bard left in a neighboring room while his acolytes did his dirty work. The adventurers suffered a string of bad luck and the situation looked dire.

That’s when Gaotl, naked, drugged and laying on a sacrificial altar, came to. A lizardman druid holding a dagger in his hand. (Using a cinematic point), Gaotl jumped to his feet and grappled the evil bard, pinning him down while the rest of the party neutralized the other two enemies.

One of the bards was burned by the warlock and losing all hope, attempted to jump from the 1st floor balcony to escape. He rolled a 1. 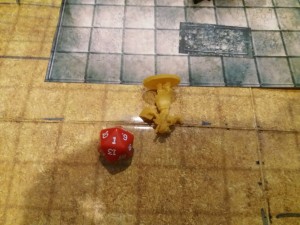 The party, in a battle-frenzy, tied up the remaining druid and layed him on the altar with the very real intention of stabbing him to death with its own dagger. A glimer of sanity flashed however and most of the (barely) good heroes decided that this was too sadistic, too evil, to kill a helpless, sentient creature when the battle was over.

The Warlock, not caring for his friends opinions, gave in to his evil nature and stabbed  the helpless lizardman. Blood pooled under the victim, filling a small encove carved in the altar. A dark, ominous voice was heard saying “thank you”.

The heroes finished exploring the temple. After nearly dying from inhaling poisoning fungie and over-coming a few traps, they were able to amass a bit of loot. Some magic items still needed to be identified, later in town. For now, the heroes found:

A lot of red, green and blue gems.

A big, Jade stone calendar that the barbarian strapped to himself.

Heh
Also met a handsome beefcat
I do so love goblins.