Hello everyone, hope you all had a good week. This week’s post will be about keeping you all up to date with the development of a custom Magic: the Gathering set so that hopefully, future amateur designers who are looking for help, guidance or advice can get some insights that I couldn’t find when I got started.

So as things usually go, my Magic Custom Set design has slowed down a lot. Not from losing steam, mind you… Just that work has started to pick up so I have less time for non-lucrative activities such as this.

That and also, following Mark Rosewater’s advice, I should be doing a hecking lot of playtesting of my set’s commons before moving on to the next step. Unlike Wizards of the Coast however, I don’t have a team of enthusiastic MtG players waiting to do just that. I have exactly two friends that I both enjoy playing MtG with and trust with their insight as well, so opportunities to meet and playtest are few and far between.
Let me specify so I don’t hurt anyone’s feelings: I have more friends than these two, and I respect their opinion, but they’re either inexperienced in MtG, or play in a way that I’m not interested in (heavy control).

I still work on the set every day. I’ve just scratched my entire uncommons and rares because they were designed very early on and don’t really fit anymore. 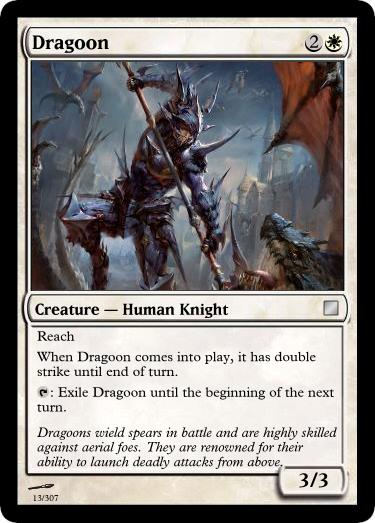 I think I managed to create a mechanic that impersonates their special ability well. It even got the comment “This is my favorite card of your set” from a friend.

The problem is that I’m making a MtG set which takes place in a DnD campaign. It has nothing to do with FF.

I shouldn’t try to stick every single cool thing I know in one single set. I should look for a specific flavor and implement that.

To keep moving forward, I try to design one interesting card a day. Much like a writer’s daily minimum word count, it creates a beneficial habit.

At the time of writing this, the set is sitting at Commons Iteration 3.0 with a playtest happening tomorrow, while I’m continuing to add cards by designing the uncommons in a vertical cycle manner (from the bottom up).

A few weeks ago already, I managed to sit down and play a few games with The Blankard. We also ended up making a few dumb videos to practice editing, which you can watch here.

Here’s what we found: Green and White are too passive. Sure, that adjective is associated with these colors, but after all the goal of an MtG duel is to kill your opponent.

This passiveness was attributed to me trying to find my feet and thinking too much about how Commons should help Uncommons, instead of making sure that Commons could function on their own.

Green had too much ramping and high toughness, nothing aggressive.
White had a lot of ways to prevent damage but not much offense.

Black on the other end, works well already and has lots of synergy with itself and other colors. It’s the color that I re-worked the least.

Blue is strong. That’s the actual note I wrote hehe. Blue was hard to stop and worked well at a Commons level already, although you can’t really feel the flavor of the set in it so I decided to re-design most of the cards.

Red is aggro. Well, that’s what it’s supposed to do, right? Actually Red seemed to be having a bit of a tough time by itself, but mixed with White it kicked serious ass (against the other, unbalanced colors). I actually decided to scrap the entire present mechanic for Red as it didn’t seem to make much sense game-wise.

On a more important note though, all the cards feel repetitive and the flavor takes too much place compared to the mechanics. For me, that meant a serious lack of creativity and foresight but it also shows my early mindset: “Let’s make a quick MtG set to make my D&D campaign deeper”.

In the end, I’ve realized that more than anything, I want to make a balanced set which will be fun to play and offer a bit of originality in the world of Magic: the Gathering. I intend to share my design road map, progress, mistakes and eventually share the whole set in an easily printable manner for people to enjoy.

I want it to be draftable.

I’d be lying if I said I was making this for pure pleasure… but it wouldn’t be a big lie. I’m learning tons in ways of game design, game balance, organizational skills and diligence.

Lastly, I’m secretly hoping that doing all this hard work will bring a bit more attention to the blog and the YouTube channel so that all the time I spend on my hobbies could also bring in a bit of money to support myself and my family. I’d love to collaborate or contribute on projects of the nerdy/geeky kind with other creators. Hopefully, showing my worth and building up experience will amount to something one day.

That’s all for today. The next installment will most likely talk about the lessons I have learned designing a custom MtG set and offer a handful of links to articles that should help a fellow custom set designer.

In the meantime, feel free to add your own advice, ask questions or comment below. If you think one of your friends would benefit from reading this, don’t be afraid to share the post!