At the moment of writing this I have more than 200 cards created for the set. Of course, all of these are just bare-boned and the flavoring and balancing will soak up a lot of time in the coming months.

It’ll still be several months before I print out a functional MtG set (at which point I’ll produce a few videos to give it some weight) but in the meantime I thought I’d share some of the cards that give a good idea of what’s going on in King’s River and the surrounding lands.

Disclaimer 1: I know King’s River is supposed to be full of dinosaurs and has a South-East Asian feel to it, but it’s hard to find Vietnamese-influenced fantasy art.

Disclaimer 2: If you see some of your art here and you want recognition or want it removed, please don’t hesitate to contact me.

I’ve decided to start with some green cards, simply because the 1st card I designed for the set was green (not pictured here due to possible D&D spoilers for my players). 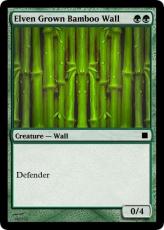 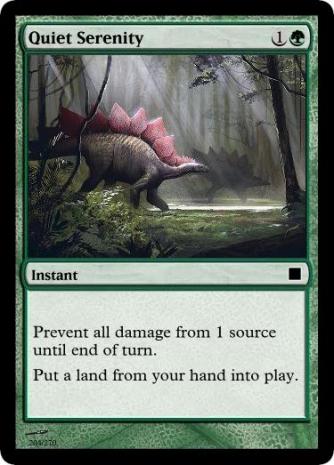 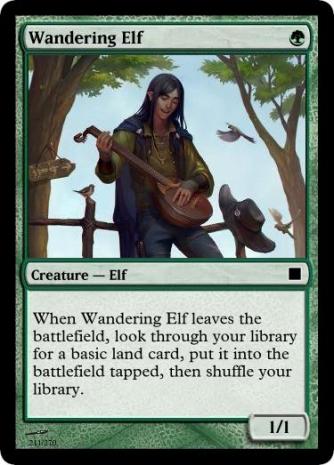 Some of my Forest lands showcase bamboo to emphasize the ASEA feel… but my setting’s continent is big and features different kinds of biospheres so out of the 5 lands we’ll see a different canopy.

Bamboo is also shown as a take on the classic green defender card – which is something my players have already seen. A tavern grown out of bamboo (called The Green Coconut) housed them before.

Constrictor is something my players wrestled with during a session as well. The art is directly lifted from an official MtG card too (which was the inspiration for that encounter).

Sacrificial Hero is a very early draft but I wanted to showcase the flavor of the Lizardmen of my world, who are heavily influenced by the Warhammer Seraphons and the humans of the MtG Ixalan plane. My players have met these monsters last session, only they were covered in black scales instead of green.

Quiet Serenity is also a very early draft but I wanted to showcase Stegosaurs since that’s what the players were looking for as their very first quest.

Wandering Elf is one of the first cards I made for that set, and still one of my favorites to date. I think the mechanic represents well that it’s a wandering being. It doesn’t read “when it dies”, it reads “when it leaves the battlefield”, which also open the door to interesting combos. Also, it introduces the main tribe for that color – Elf. However story-wise it collides with a big hook: that elves have been cursed and cannot feel joy anymore. Maybe I’ll change it to Half-Elf, because it would actually work well world-building wise, and in collusion with this card: 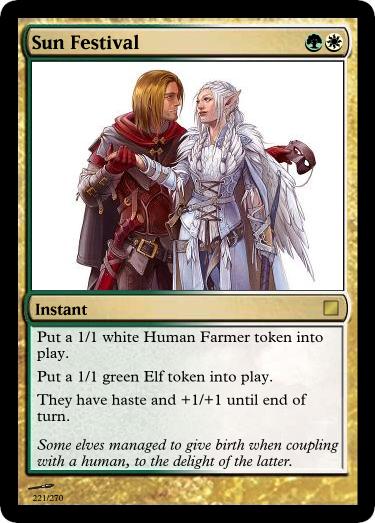 As I said before, Ravnica is a huge inspiration for this set and I’m going through the card list to help me complete my own set. 306 cards is a lot!

If you’re interested in contributing,  be it for playtesting, balancing, writing flavor text or submitting your art, I’d be delighted. Feel free to comment below or contact me at geeksaigon@gmail.com!

Thanks for reading! Let me know which color you’d like to see next!