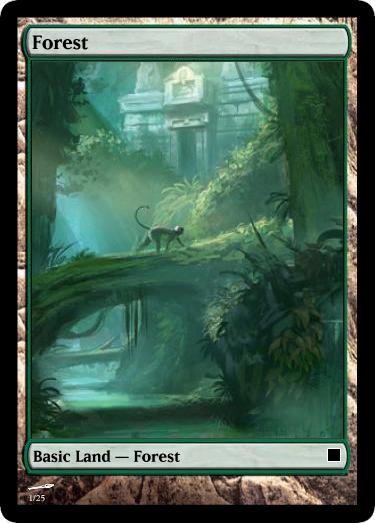 This week’s recap will be more straight-forward as I don’t have much free time this week. Sorry! In the hopes that you will forgive myself, I will include MtG cards from the custom set I’m building within this post, as long as they are related.

Disclaimer: I own NONE of the art featured, and I am in no way involved or profiting from Magic: the Gathering. This is merely a fan project, an homage (please don’t sue us Wizards of the Coast).

We opened this week’s session with the battlemap flat on the table for the first time since we started this campaign.

The party settled in for the night in their makeshift camp made of a palisade of bamboos sharpened and sticking outwards. They found a lot of old black arrow and spear heads while digging through the soil.

The elf Uz had offered to take the first watch. While everyone was recapping the events of the day over the crackling sounds of the fire, a Halfling Druid came up to them from the darkness and asked if he could join them for the night. The party accepted as these parts were too dangerous for a single adventurer to spend it alone, even for a druid.

Later in the night, the Halfling was woken up by a squirrel scratching at his feet and looking alarmed. Frang (the Halfling) woke up in a hurry and woke up the rest of the party… except, the Elf and the Dwarf wouldn’t wake up.

A dart came flying out of the night and hit Frang in the neck. He immediately felt his arms and legs getting heavy, but didn’t fall asleep. Gaotl, first on his feet, lunged out of the camp into the darkness, stopping at the limit of the fire’s light but couldn’t see the attackers.

The group fought and killed 3 Goblins. The Druid almost died but discovered a talent for healing.

The party had managed to capture a Goblin but killed it the next morning, thinking it was making a fool of themselves – they had asked it to guide them to its lair. The druid had asked owls to follow a terrified Lizardman however, so the group was able to find the monsters’ lair:

An Aztek-flavored jungle temple. They found two cages, one holding corpses and the other one dinosaur eggs. They failed to hear the rising drums coming from within the temple (I was increasing the music slowly, over a Jungle Sounds track. I played both on Youtube at the same time and it replaced their Perception check) and were caught red-handed by two Lizardmen Bards and their six crazed acolytes.

The Barbarian tried to intimidate them but failed miserably, which made him the target of the bards’ fury. He was hit full-force by an illusion and an hideous laughter. 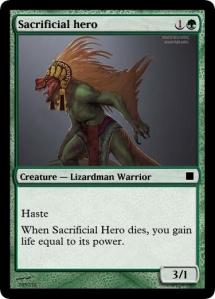 The Warlock, panicking, spat fire at everything before him (barbarian included) before watching as Gaotl, the mighty human, was sent flying in the air rag-doll style by the last spell of the Bards.

Lying dying, breathing heavily, its vision blurry, all Gaotl could do was watch as the Druid he had just met, and the strange Tiefling he was starting to call a friend, ran away from the temple and into the jungle.

One thought on “King’s River session 3”