In this post we’ll be looking at a Boros Legion character.

I’ve always liked the Boros-related art but can never, for the life of me, make a deck that wins, which makes the guild seem a bit tragic to me. Are they doomed to fail due to their idealism?

I’m picturing their ranks being filled by a lot of shiny armor worn by all manners of creatures, gleaming with the reflections of fire and holy magic of its legion’s mages and angels. Every footman’s dream is to be noticed by any of their angel leaders and in their mind, are doing God’s work.

This Lawful Good Goblin Cleric has been with the Boros Legion for a few years now and has not yet been able to earn himself a promotion, through heroic deeds or otherwise. He yearns to be noticed by an angel and carries a feather he has found with him everywhere he goes. He puts his complete faith in the angels who soar above him, and the guild’s organization – chain of command and tactics.

In battle, he tries to lead and inspire the troops with courage and ferocity and usually goes for the biggest target in an offer to have its deeds noticed by superiors.

Here’s the very basic PDF of his character sheet for you to peruse. Please let me know what you think!

Behind the scenes facts: I used this card for inspiration: 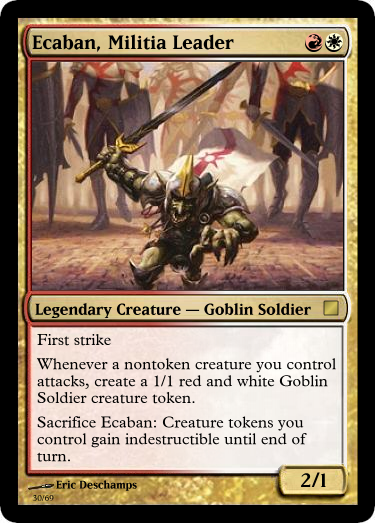