It’s been a month since I hit a creative and motivational wall. There’s (many) no excuse for the lack of communication and improvement, other than the simple fact that I have too many hobbies and my motivation level hasn’t been the best these last few months.

It’s all a vicious circle.

In the hopes of re-kindling the fires of creativity, I’m updating you (and myself) on the creative and mechanical direction of Minibots Arena 2.0.

This post was getting too long so I’ll not be introducing all the changes in this single post.

Technically, the previous version was working, and it was fun. However, it was headed towards more and more complicated grounds and the player turns were getting slower and slower. Also, the concept was getting further away from my original idea. From what I’ve read online through other devlogs, this is quite normal and should be welcomed.

For me, the bad was outweighing the good, and so I’m scrapping some of the game and am ready to try a different approach, just out of curiosity. Technically, about 50% of the game is the same.

The mechanic/flavor idea of having little minibots fighting each other is still the main point and inspiration for it all. I keep saying that the original idea was to mix chess and magic, but the last iteration of the game I printed seemed more like FF tactics on table than anything else.

Although equipping and upgrading bots was fun, it was starting to prove to be quite limiting, using a lot of table space and to keep things faster and simple I was limiting the number of deployable bots to 3 per team – far from chess.

There’s a reason why tactics games work great in the video game format: the computer simplifies everything.

Instead of having only 3 powerful minibots that carry a few items and weapons, why not have a limitless amount of small minibots that have a common pool of items and abilities? This will both improve strategy, cut down on hand management time, and improve on the deck-building aspect of the game.

Previously, each minibot could perform 2 actions a turn, reminiscing of Dungeons and Dragons combat. Movement was one of them. However I wanted deck-building to be more important, so why not make Movement part of that deck? I’ll be play-testing Movement cards with the next print-text.

One of the reasons for the change is that players were constantly asking “how far can my minibots move?” and had to refer to their individual minibots and upgrades constantly to make sure they didn’t do a mistake. It also involves an element of surprise to have your movements hidden from other players. 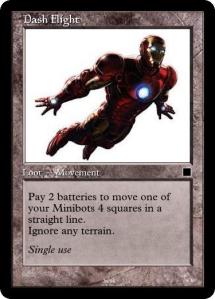 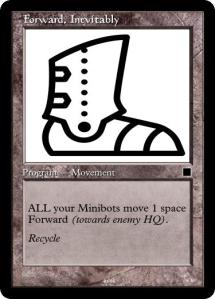 Of course, this might slow down the game incredibly but it might also add a level of strategy needed. Only play-testing will tell.

While it was fun to calculate your move according to the other player’s easily readable stats, the downtime between turns was constantly in the minutes. This change should also open up the deck-building concept of the game. You want a faster army? Add more Movement cards to your library!

After recently playing Dominion and Arctic Scavenger extensively (thank you The Boardroom in Thao Dien, HCMC, for acquiring the games) I’ve realized that you don’t need a million different cards to make a good game – just a couple of good, balanced ones.

Instead of having way too many weapons in an incredibly thick deck and having to refer to all sorts of rules for differentiating an attack from a bot or from a sword, a gun or metal and energy, I’m making every attack be a part of the Minibot itself. 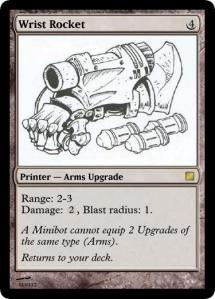 And the new, simplified stuff. 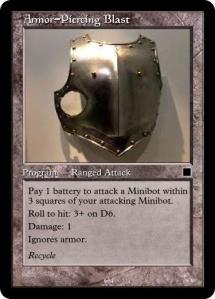 My goal is to give players the choice to customize their deck towards a certain playing style (melee, all-around, artillery, etc) and having to “evolve” their deck as they play. Having too many different cards was making it too hard to make effective combos. I mean, look at MtG – they had to put a limit of 4 copies of the same card per deck because it’s so hard to make combos work that players wanted 10 of the same (but when the combos work, you win).

Rather than having tons of upgrades for 1 Minibot, why not have 1 upgrade shared among all your bots? This is an idea that appeared in many of my brainstorming sessions and that I’m finally giving a try to.

Here’s an example of the old upgrade cards: 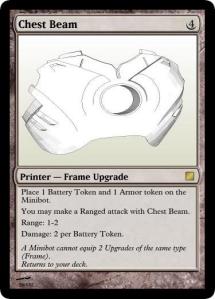 Previously, each Minibot’s parts could be individually upgraded. Arms, legs, helm, frame. It was fun and stirred the imagination, but players ended up having to remember several mechanics for each minibot and it took up way too much room on the table.

Notice the HQ – Upgrade slot line. More on this in the next section.

Now, instead of having to manage and remember all kinds of bonuses, you simply upgrade all your minibots – until you change that upgrade. Hopefully this will make the game more manageable, faster and help all the players remember what their adversaries have going on. It may also make things more interesting for factions.

It used to be divided in hex grids – I’ve decided to change that. Although aesthetically pleasing, it wasn’t working mechanically. Playing X-Com 2 (best game ever), a big aspect of the strategy is cover. Playing Warhammer 40K, cover is also important, although not really well managed in terms of game mechanics. I wanted to make this important in Minibots Arena but a hex grid made it a bit complicated, even conflicting at times.

To put it in Jesse’s (main playtester) words: “With squares, you’re either behind cover or you’re not”.

The HQ has been quite fascinating to work with – a rewarding part of this hobby. At first it was simply a spot in the arena where the Minibots would deploy from. It quickly evolved into a target for missions and an important part of the upgrading mechanics (you could only upgrade or equip Minibots while they were next to their HQ) which helped a lot with rules clarification.

I made some cards as well to test some mechanics. Here’s two iterations:

Nothing mind-blowing but it added a bit of depth. It was mostly ignored while in-game.

If you look at the HQ on the right, you’ll see in the description “Player Mat – HQ”. One thing that made my face wince during play-time was to see how disorganized the other players were. I thought, if I can have a player mat, it should help keep everything clear and limit table spread.

Speaking of Player Mat, it’s now definitely something needed, simply because the new mechanics I want to test call for it. Here’s a quick example of what I have in mind:

Of course, having the player mats in different colors will make it more visually appealing and should be compatible with the often-requested factions. There’s also room for a Turn Order or Basic Rules section.

Here’s another part of the game I’ve been toying with and will play-test. Rather than having to play cards to gain batteries, I have an idea of a mini-game phase, sort of light token-placement to add competitiveness. However, I’m well aware that when a game tries to be too many different things at once, it often fails, so I’m keeping the regular battery cards in the game and giving the players the choice of using either.

What’s the power wheel you ask? Imagine a hamster wheel full of minibots, running to generate electricity. After players “spawned” minibots in their factory, they have the choice to send them out into the arena or to the power wheel. Basically Whenever a new minibot is sent to the power wheel, it pushes the previous ones forward. At the end of the phase, players gain battery tokens according to their minibots’ positions in the wheel.

They can also use regular movement cards to give themselves an edge. What to do with all that excess energy? Why not draw more cards? Keep things moving!

Well, that’s all I have for today. There’s obviously tons more, like the fact that I just purchased Tabletop Simulator on Steam, so I’ll be converting everything to digital soon, for example.

I’ll let you know more about this as I progress. If you’d like to see cards or components or ask me questions, feel free to use the buttons below to contact me on Instagram or Twitter!

99% of the art used for cards is straight from Google and is subject to change. If you’d like to be credited, or would like me to remove any of the art, contact me.