Hi fellow humans, for this log I’d like to (finally) share information about how to play the game. I’m trying to keep these texts bite-size so today we’ll only be scratching the surface. I’ll not be sharing the rules just yet because honestly, they’re a mess right now. Just when I thought I was getting settled on an idea, the most recent playtests uncovered a mine of ideas (which is a good thing) that require clarification and fine-tuning.

However, if there’s a concept you’d like me to elaborate on, I’ll be happy to do so in the comments or in a future log.

But what do you do in the game anyways?

Short answer: in Minibots Arena, players aim at building and fine-tuning their deck, juggle attacking, looting and gaining currency, and try to complete a mission or score victory points, depending on the scenario.

The mindset behind the curtains

In order to keep the downtime short and the gameplay fluid, at the moment most of the cards are simple and straight-forward and the mechanics intuitive. However, the balance is fragile: will people find the game too basic? Will more serious players accept longer waiting periods between turns for a deeper strategic approach?

From what I understand, traditional wargames (or Tactics video games) seem to have players going through all the phases on their own (deploy – move – combat), with the adversary patiently waiting, brooding and plotting – even Magic: the Gathering follows that concept.

Warhammer 40k does a good job of keeping the off-player busy by offering plenty of saving rolls and a thick booklet of rules to peruse or having you re-thinking your army color schemes.

Other more traditional games like Chess combine moving and attacking in one short, single phase and players can only choose one unit to use at a time, which generally keeps things moving at a comfortable pace.

At the moment I’ve decided to combine wargaming with card games, sprinkling a bit of tactics on top. The board is covered in hexes, color-coded and numbered for the Drop system I’m rather proud of.

So then, let’s take a look at the current turn order: 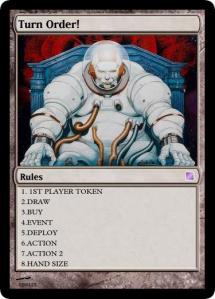 I don’t know where that art is from, if someone could enlighten me.

Keep in mind that we are at a very early stage of development and all playtesting has been aimed at testing the core mechanics – an advanced ruleset is in the works.

Let’s go deeper in the steps/phases as they stand now, build 4.0

That’s all I have for today, hope it gave you a bit of information and made you more curious about the whole project. I’ll try to make an actual, White-Dwarf-Magazine-style Battle Report next time I’m playtesting!

May your rolls be critical.