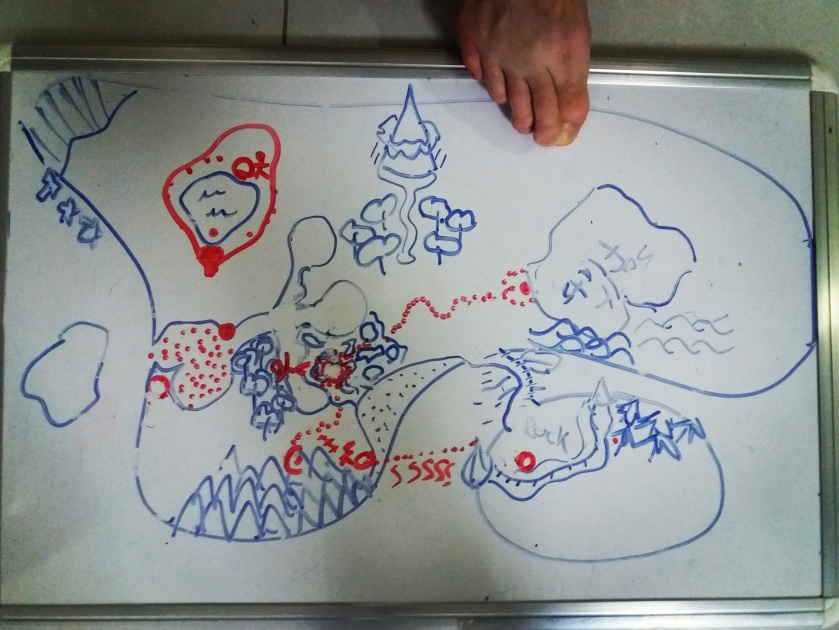 2 buddies, in a land far away.

I hope you read this with your trailer voice.

As some of you know, I’ve been living in Ho Chi Minh city, Vietnam, since March 2015. If you’ve been reading my posts (of which there has been none for almost a year now), sometimes living here is awesome, sometimes it’s not so great. Which makes friends all the more precious.

A good friend of mine (we shall name him Jay) has recently been pushing me to reconnect with my creative side (I’ve been stagnant in writing, drawing, video editing, playing music since the last Road Beer post) and after seeing what I’ve written for our online, between-sessions Pathfinder game, has doubled his efforts to get me to write again – to motivate himself to pick up the quill pen again, I suspect. I take it that my friend likes to have a partner/rival to motivate himself in his own creative endeavors.

So, Saturday night, I found myself at my friend’s apartment sitting on the floor and adjusting the fan speed, surrounded by snacks, alcoholic beverages, a fancy notebook, a pen and an eraser, a white board, different colored markers and most importantly a few copies of the Dawn of Worlds PDF, hoping to use this game to motivate ourselves creatively.

For those of you who are not complete gerds (it’s like geeks and nerds had a baby), Dawn of Worlds is a game – more of a guideline – for creating fictional worlds. All you need is an equally nerky friend, 2 dice, some paper + stuff to write on it, and a couple of hours. If you’ve already played board games, or Dungeons and Dragons, and if you like Fantasy novels, after the initial “what are we doing exactly?” thought process, things should start to pick up and become highly entertaining.

We decided to draw a crude map of our world on a white board, with a blue marker. We then perused the rules (we had tried our hand at it for an hour or so, 2 weeks prior) and set forth throwing dice and shaping the land.

Resisting the urge to draw a dick, I outlined our continent, and we slung our respective dice – Green and White for my friend, Red and Black for me (following natural Magic: the Gathering color combos) – and built our world. I self-appointed myself the task to jot down important events neatly in my pristine notebook. I didn’t feel like writing “In the First Age, on his awakening, his Godliness Goldilocks (that’s Jay) carved a mighty river out of the land”, so most land-carving was left out.

I was drinking cheap beer, my friend was downing Strongbow, his wife and roommate were watching a silent Korean romance on the tube. It was already 11 pm and we knew this was going to be good creative-muscles-flexing/hilarious.

I think you should take a look at the PDF linked above for the rules, but briefly, A Dawn of Worlds playthrough is to be divided in 3 Ages. Every turn, players throw 2d6 and count their points, then spend points doing various “Acts of Gods”, from Shaping Land to Advancing Civilization, to Commanding City or creating a Catastrophe. The First Age is mostly about land shaping, as “Shape Land” and “Shape Climate” are the cheapest actions of the Age (and the map is mostly blank, save for the continent’s outline).

Resisting the urge to draw a dick, I outlined our continent, and we slung our respective dice – Green and White for my friend, Red and Black for me (following natural Magic: the Gathering color combos) – and built our world. As I mentioned prior, I self-appointed myself the task to jot down important events neatly in my pristine notebook that was given to me the month before as a parting gift and that I had been saving for “something special”.. I didn’t feel like writing “In the First Age, on his awakening, his Godliness Goldilocks (that’s Jay) carved a mighty river out of the land”, so most land-carving was left out.

However, I would like to share with you the major events of our world, as written down, with specifications and details added in italic (I’m adding these as I write this blog). Looking back at this retrospectively, I should have kept track of drinks consumed as well.

Turns are more or less differentiated by a “-“. If there is no hyphen following a line, it means these actions were done on the same turn. I came up with this system about an hour in however, and might not have followed it thoroughly or explained to Jay when I imposed on him the note-taking.

We were there to have fun, whatever. Get loose, ya know?

Without further delay (and as soon as I’m done smelling the pages of my book), here is more or less what happened:

After a few turns of geo-manipulation, Jay grabbed a red marker to identify civilization.

-Jay created Throglodytes by a big lake, near the sea (Jay emphasized it’s THrogs not TRogs)

-Sub-Race of Swamp Throgs appear nearby, in a marsh

Jay has a thing for pre-historic races. I continued to shape the world randomly. The instruction manual suggests that a vote between players take place after 5 rounds of each Age to see if the game should move to the next Age (where tasks and powers change in point value) and our First Age must have lasted at least 10 rounds. Rivers, lakes, islands, climates, forests, jungles, rolling hills, an ominous, solitary mountain, a great lake, a huge marsh, and giant salt flats have been drawn on the map)

-Throgs found Order of ChurchFoot (I can’t remember what this was, several beverages were had already)

–Étienne (that’s me) created Canyon Goblins (They are red)
They founded La Craque (City next to a great canyon)
Avatar: Goblin Tinkerer (Later named Red Big)
He commands them to form an army

Short behind the scene discussion about when to write recto-verso in a fancy notebook, or when to skip a page. I decided to not skip pages.

-Throg tribes make trade treaty with each other (your shrimp for my bog mud?)
Boom in shrimp population
Dillian city develops poisons

-Shape Climate (a cold front blows down from the icy caps of the North, down towards Pooptown)
Catastrophe! Human famines due to frozen crops

-The cold front moves further south
Catastrophe! Shrimp population collapse
Humans found Order of Chronologues (to study the cycles of nature and have better harvests in the future)

-Dillian city finds sulfur in the neighboring mountain range
Discover explosives (Behind the scenes, Jay asks if it’s okay to go straight for explosives as major event in a civilization, hence the “Discovered Sulfur” event prior)

-Catastrophe! Dillian city blows up (Behind the scenes discussion on the consequences of this)

-Humans claim territory around the lake that they terrorize

At this point I can’t find a comfortable way to sit and have had my share of beers, so I delegated Jay to take over the noting down – just as it was starting to be long and tedious mwahah – and Jay did an awesome job of keeping track

-Crack Goblins launched across the bay by their siege weapons installed atop a mountain, carried by miraculous hot winds along with their avatar Red Big, to establish Littertown (I used points to Shape Climate and create hot winds to support their gliders, following Jay’s fair criticism)

-Dillian city Order of Brigadiers, and University of Boom, founded (This God is growing concerned)

-Hot Town develops really good tasting salt (A lot of fun is had pronouncing “Really Good Tasting Salt” and jokes are made about it making world peace possible. Jokes)
Hot Town also it’s own mortar team (text not edited, to show our state of drunkenness at this point)

-Human city of Pooptown set up a fort by the lake (Perfect stationary target for artillery, Jay mutters)

At this point we felt that from then on, nothing much smart was going to happen that night, so we decided to snap a picture of our map and go get some more drinks.

Please let us know if you would like to know more about a specific event/race! We love this stuff.

Foot for scale, no banana on hand