August 22, 2016 Étienne Bureau Life, and other things Leave a comment

Sure, it’s not an experience I especially enjoy.

It’s repulsive, to be honest. Every time I see one I get a little tingle of eew that reverbrates through my spine and down to the tip of my fingers.

By now I know they’re definitely not as shocking to find in my house as rats, and after watching an aged Vietnamese man avoid stepping on one as he was going in his home I started to wonder why I feel like I need to kill them as soon as I see them.

2 years ago, my friend Ken from Don Det (you might remember him from my Laos posts, he built and runs One More Bar) saw that his baby was starting to get little red spots on his body. It wasn’t chickenpox though, it was from the colony of red ants growing under his house.

These little fire ants are quite pesky all over South-East Asia. When I first worked at One More Bar back in 2012, there was a tiny colony right in front of the ice cooler and I would forget it was there every time I went for ice.

So one morning I get up and see Ken in the bar (wooden platform with walls built over the Mekong, on the other side of the dirt trail is his house) wearing nothing but ripped blue jeans, he was boiling water. As is our ritual, I chat with him about the night before, then follow him as he grabs the kettle and walks to his house.

We’re standing under it, because it’s built on concrete stilts.

I stand next to Ken and he pushes me back gently with his forearm, then points to the ground with his lips. That’s how a lot of Lao, Cambodians and Filipinos like to point: pretend you’re kissing the air and point your chin towards the point of interest, instead of using your index finger.

I look down to see a huge fire ants colony. I mean, the one from the cooler one was a fishing village compared to this one, a megapolis.

“So why do you have boiling water, Ken?”

“These fucking ants man, they bit my baby Zen”

“So you’re gonna destroy the nest?”

At this point, Ken Asian-squats near the nest and seems locked in internal turmoil. Or maybe he’s just hungover, I can’t judge clearly the look on his face. Then he says:

“I don’t want to kill all these little souls though. It’s not good to do that, Étienne”

Youn, Ken’s wife, suddenly appeared out of nowhere, took the kettle out of his hands and mercilessly poured the entire boiling content on the nest. The ground became a typhoon of red ants, scrambling to defend their queen.

Youn then frantically started dancing and running around the front of Ken’s house, in her traditional sarong and generic t-shirt, slapping her ankles and legs with her hands.

Everyone and their neighbor started laughing at the situation! I mean, it’s the morning, Ken and I are groggy and airing out our chests, then this happens. So as Youn is laughing and trying to get rid of the ants, behind me I hear a close-mouth Hahaha (more like Hm-Hm-Hm!) as “Mea”, the nanny and adoptive mother of Youn walks by and appreciates the scene. Her mouth is full of that red bark the old ladies here like to chew. Apparently it protects their teeth.

As soon as she was free of her assaillants, Youn proceeded to boil several more kettles in a row, drowning and boiling the royal fuck out of the queen and all her mind-slave subjects. You mess with my baby yo? I destroy your tiny underground and elaborate labyrinth!

So for a while, I stopped killing cockroaches.

Last year I was renting an apartment in the Go Vap district of Ho Chi Minh city and shared the toilet with this big black one I called Tony. I never killed Tony, but I saw it one time fucking with the cat’s food.

Now, my house mate has built an aquaponic farm (here’s her brand-new flyer) and the fish in there are fierce. I put 3 squashed cockroaches in their tank today while doing a bit of gardening and the little grey dudes went piranha on them! It’s quite entertaining and gives me an excuse to kill ‘roaches.

So, sorry roach souls, but I’m still very averse to your presence and will try to end you on sight.

I came up with this shirt design a while ago. 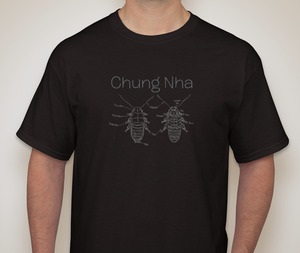 That song was popular when I was traveling through Japan and I've had a strong feeling of happiness attached to it ever since.
Back to work, 9-6 Mon-Fri gig, clean offices, well organized, a lot of communication and teamwork, I must be dreaming? Complete opposite to the last 6 years of my life.
I haven't really enjoyed living in HCMC for a while, but this weekend has been sweet.