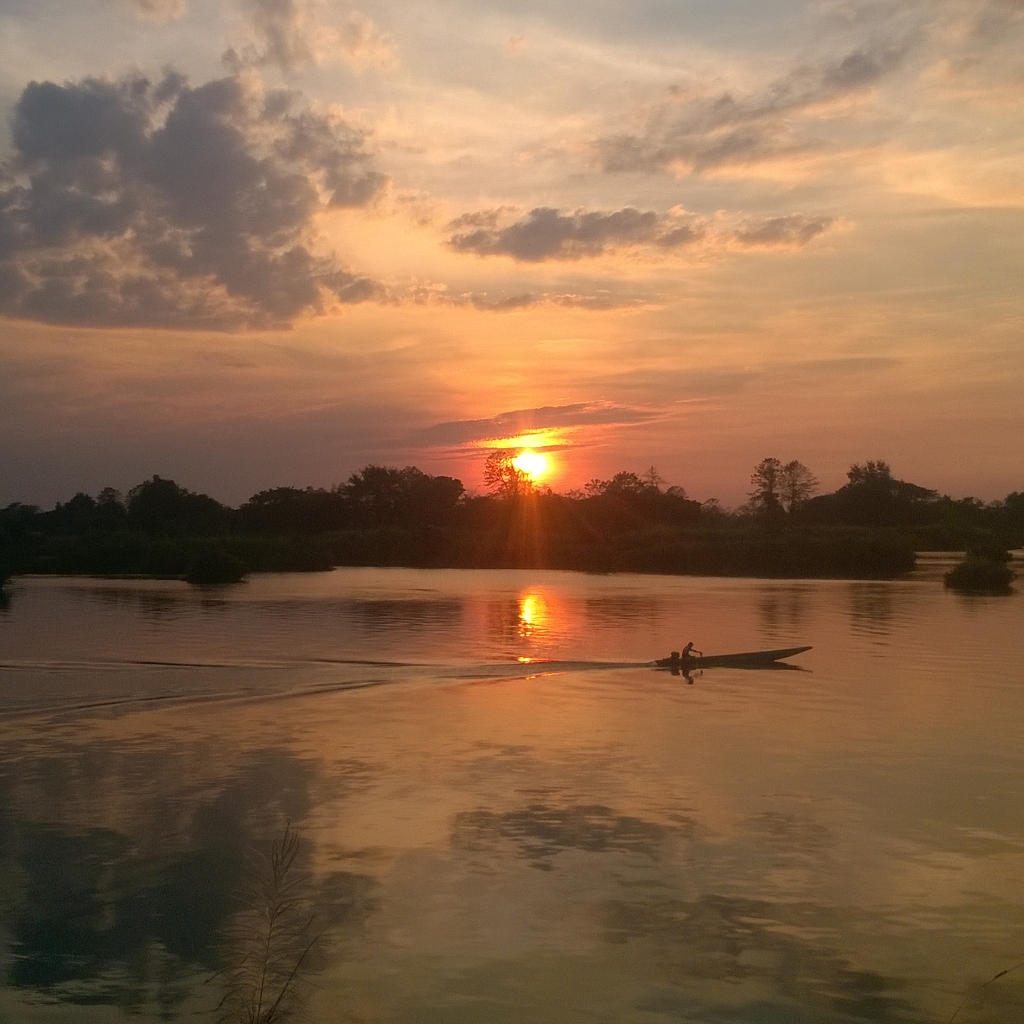 Our protagonist wakes up abruptly, momentarily in shock. His cell phone alarm, set for 6 am, seemed to have never rung at all. He checks the clock: 6:55. His flight to Hué is at 8:05. He is instantly, fully awake.

In a panic, he rises from the couch where he slept the night as a loud noise signals that sweat has fusioned his skin to the leather of the furniture overnight.

He has sub-let his room for a month, starting yesterday. His bags are already packed and waiting patiently to start their journey. They seem to be staring at him.

A mental tug-of-war begins as our friend walks back and forth in the kitchen, holding his head. Is it too late? Did he miss the flight? Should he call a taxi and attempt to explain his address in an unfamiliar language? Should he just walk to the main road, 300 meters away and hope for a passing cab? Should he just drive to the airport himself and pay a month’s fee in parking?

A quick, obligatory morning pee in the tiny shared bathroom under the stairs. He washes his face. He stares at himself in the mirror, calls himself an idiot and tells himself to calm down. He decides to take his chances with the taxis on the main road.

He can’t find his keys. He left them in his room, where his friend and tenant is sleeping.

He knocks on the door, his voice betraying the urgency of his situation. His friend wakes up and hands him the keys to the automatic garage door. “Good luck” he mutters.

Our protagonist cannot leave with them however. So he opens the door, brings the bags to the road, walks back in the house then presses the button that closes the door, drops the keys on the kitchen table and runs to the street before the door can close.

Later he will recall this moment, Indiana Jones soundtrack in mind.

The adrenalyn is still pumping in his blood. It’s early, even for Vietnam, and the air is as fresh as Saigon air can be. His bags are ecstatic to finally get moving. He reaches the main road and his eye catches a welcoming sight: a taxi cab is parked on the side of the street expectantly. The driver spots him immediatly and with an inviting arm, opens his trunk and helps our friend drop his bags in.

“Toî đi…” our friend starts. He doesn’t know the Vietnamese word for airport. “Airport! Airport! Fast please! Good tip!” The taxi driver smiles, gives a thumbs up and says a few quick “Ok!” to show that he understands the urgency.

On the back seat of the cab, the 31-year young Canadian man is hunched halfway over the front seat, staring dead ahead, talking to the driver… but in reality he talks to himself. “I fucked up. I didn’t hear my alarm, or I turned it off without waking up. I swear, I can do that. My flight is in one hour. Think we can make it? There’s no one on the road, so it’s good yeah? I fucked up. Fuck”

Our friend arrives at the airport a record 20 minutes later. He grabs his bags and gives the cab driver a $5 tip, over a $10 ride. The Vietnamese man tries to give him back change – tips are rare here – and smiles when he understands he gets to keep it. “Thank you! Thank you! Ok! Ok! Bye bye!”

Flight still on time. Check-in booth spotted. An elderly Vietnamese couple seems to be having trouble checking in. As he suffers in line, our Canadian friend is sweating. His facial expression is as easy to read as a child’s picture book. Suddenly, the clerk asks the elderly couple to stand aside. She waves to the young westerner with the nervous look squatting his face.

“Please tell me it’s not too late”.

“It’s okay, sir”, she reassures him, with a smile that could have melted the polar ice caps.

Our protagonist is sitting on a mat on the floor with his friend from Hué and a monk, in the latter’s room in a quiet pagoda. He can hardly believe where he is. He’s eating lunch and discussing teaching English to adult Vietnamese. His friend, the woman on his right, is drinking his every words, sometimes stopping him to ask to hear a word again, holding food with her chopsticks in mid-air. She repeats the word slowly a few times until she gets it right. She owns a language center and has been perfecting her English for the last 2 years. The monk is one of her teachers.

Conversation with a monk: check!

3 hours later and our friend politely asks to return to his hotel room for a nap. He has a long journey ahead to make it to Don Det, Laos, his ultimate destination. About 800 kms. Last night, he didn’t fall asleep until 4 am, the usual travel-excitement keeping him wide awake much too late.

As he is about to leave the pagoda on the back of his friend’s motorbike, a young monk dressed in a brown robe, with a smile that could brighten the darkest recess of the universe, hands him a flower bouquet, adding “Welcome to our pagoda”.

Our friend is humbled, taken aback. His tongue stumbles. “Merci… Thanks! Cam on! Ah… Xin cảm ơn!” he stutters, as he bows in respect.

Our weary and stinky protagonist is finally on Don Det. A man he knows from home, to which he suggested to go to Don Det 2 months ago, is hugging him tightly. A group of strangers are circled around beers and joints at the wooden, open-air bar, even if it’s 11 am. The young Canadian man doesn’t know, but these strangers will become his friends and entourage for the next weeks and years of his life.

Yung, Ken’s wife, seems to have recognised his voice. She walks over, smile beaming.

Not the polite, obliged smile of a check-in counter individual, or the smile of a young monk free of all the burdens of the world, but the smile of someone who hadn’t seen their dear friend for a long time and has been awaiting his return for a few months now.

Our delighted individual gives her a light hug. It’s not Laos customs to hug but he chances it. She laughs and pats him on the back.

“Ken pai sai?” he asks. She answers with a nonchalant wave of the arm in a direction, pointing with her chin. he grabs her gently by the arm to come over to where he laid his bags down. It’s a 60 gallon backpack. About 1/5 of it is for his clothes. The rest is gifts he brought for the family, which he gingerly prepares to show off.

This time he was smarter. A folding plastic bench for the kid. 10 bottle openers, a box of pens, a princess coloring book and crayons. Shirts for the daughter, a tiny 3-piece suit for the 1-year old boy. A nice dress shirt for the man of the family, unavailable in Laos but readily available in Vietnam. Jenga. Dominos. A bag of lollipops for everyone. A faux-pas: a wodden box for the wife’s jewelry (she has none).

The piece de résistance: One More Bar shirts, yellow on black lettering. Big. Western font. It’s loud. Six of them. One for him, one for his friend Keppy, one for Ken. A medium one for whoever. And two tiny ones, for Ken’s children. Yung doesn’t take any of it in the house, as if she’s not sure it’s for her.

“Did you bring anything for yourself ?” jokes one of the strangers at the bar, as he gets up and hands him a lighted joint.

Ken finally shows up on his motorbike, his copy-paste kid Zen sitting on his lap. The two friends’ eyes lock.

“Fuck yeah! First though, come check this shit out!”

Edit from 2018: The man who handed me the join was no other than John Newhouse, someone who became a very dear friend. He passed away this week an I already miss him.

May you rest in peace, John.

This last year's been rough, physically and mentally with steep highs and deep lows. . . Realising you're often not worth calling in the eyes of others. Ghosted, even. Being talked condescendingly to, looked at like you're the dumbest or most annoying person alive. Maybe I was. Honestly though, I don't think I was. . . Losing your passion for your work, realising you were just another name on the paycheck all along and that your co-workers couldn't care less if you stay or if you go. . . One realisation came to me, that I've lost my spark which made me. Vietnam took that from me. I must now work on myself, and understand the new me, for the sake of my wife, to whom I feel I haven't been the best husband for in the short months we've been married. Nothing serious, but definitely small habits that I wish to remove. . . Tomorrow at 6 am I'm flying to the in-laws. I'll be purposefully taking a break from social media and from posting videos for the next 10 days and just enjoy my new family and simpler, slower life - something I seem to have ignored a bit too much. . . 2020 doesn't look so good right now, but hopefully making the right choices in the coming weeks will set things in the right direction. Recent financial blunders due to my employer not following through on his promises, combined with a need to buy things to feel better, have changed my general plans, so I'm not sure I'll be able to dedicate myself as much to Saigon Geeks as I want, as it just doesn't pay the bills, and I'd like to take my wife on trips to Japan and Canada in the next 2 years. . . A Reddit post also opened my eyes on how much I've been spending on hobbies and material comfort when I could have been saving this money for said trip. A grand "setting the goals straight" is needed as my 35th year on this earth reaches an end. . . Sorry for the long post, but I feel like I need to leave this out instead of keeping it in, and I don't like to talk about it face-to-face. #mentalhealth
First time I get a complimentary, second-hand tea bag with my breakfast. Thanks Phatty's!
Playing a Squirrel deck in my squirrel playmat: ✔️ #mtg #commander #edhmtg #squirreldeck #squirrels #squirreltribe #greenmana #saigongeeks