Long have I wanted to visit this island, of which the reputation is on par with paradise itself.

As a big fan of islands myself, it was with grudging resolution that I stopped my bike in Ho Chi Minh city back in March 2015 (gasp! Almost a year already!) to look for work as my pockets were all but empty of Dongs.

I’ve patiently waited until I could get more than a day off in succession and a few Dongs to spare and finally, New Year 2016 (our New Year, not Vietnam’s) offered this opportunity.

On the morning of the 31st, I got my tired ass up at 5 am and drove to the airport in streets relatively empty of traffic. Beforehand, I long debated taking a taxi, but I didn’t feel like being scammed and/or late.

The flight was short and I was able to catch a few weird dreams before the landing.

When I walked out of the airport I was greeted by green mountains all around. On my phone’s map, it said that my guesthouse was about 10 km away, and for 15 minutes I debated walking it just to stretch my legs, but then I called the guesthouse and was picked up by a smooth 50-year old man with sun-tanned skin, a smile and a face that was once ravaged by some sort of skin disease, giving him a look of copper moon surface.

The guesthouse where I stayed was a few meters from the main street and a 5 minute walk from a beach, lodged in a small alley just wide enough for a taxi car. It’s called Anthinho and I can now call most of the staff my friends. I recommend staying there for anyone who doesn’t mind dorms.

As soon as I set my bags down I met a German guy named Ben who invited me to go out with him that evening for New Year’s eve party and I accepted. I then changed into a swimsuit and went straight to the crowded, nearby beach where I found an empty sunbed for $10 and where I finished reading American Gods and slept a lot.

That evening we went to Rory’s, a beach bar which was packed with drunk travellers. I don’t remember much except going back to the hostel to find a couple having a go at it in the dorm room, but I was too drunk to care and passed out one second before my head touched the pillow.

The next day I nursed a hangover on another sunbed all day.

The third day I rented a motorbike and drove a little bit up North on the West coast of the island, looking for a bit of privacy. I can tell you without any hesitation that in 5 years, every inch of beach will be lined with resorts and bungalows. There were construction sites everywhere.

I did find, after a quite fun and hazardous drive in sand, a tiny restaurant sided by pale sand and turquoise waters. The lady was very nice and made me some noodles with squid, from which I think I got the virus that would keep me in a hammock all of the following day, spitting thick flegm packing my sinuses.

I caught myself wishing that I had stayed home to play videogames instead but kicked that thought out of my life pretty quickly and as I swung in that hammock softly, my thoughts carried me to Don Det and my friend Ken, also on a quiet island, also probably resting in a hammock with his baby boy sleeping in his arms.

Those 4 days disappeared much too quickly, and after a delayed flight (starting to be the trend for me) I landed back in Ho Chi Minh city, where I found that someone had stolen my helmet, right in the airport parking lot.

All in all, Phu Quoc is amazing, the people were very friendly and the seafood delicious, if a little bit overpriced (for Vietnam). Go now, before it changes completely.

A little lady taking a break from selling fruits on the beach. She seemd about 60. I felt bad for her but she did sell about every 20 minutes.

Watching the sun set from my sunbed, where I imagined how ancient sun-worshippers would panic every time the sun would “die” and night set in.

Little lonely dude on the way to the beach. I’d whistle to him and he’d listen intently but wouldn’t try to imitate me, instead trying to bite me if I got too close. 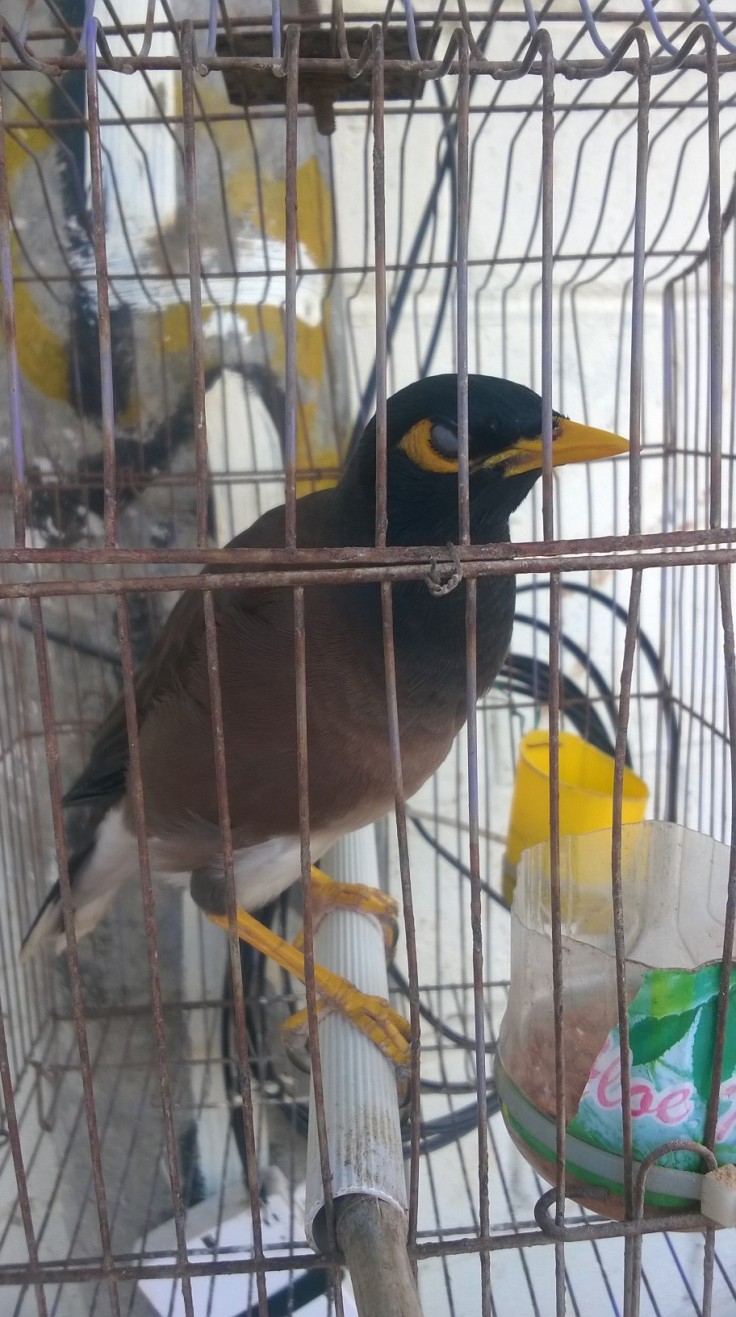 Some of the way to my secluded beach 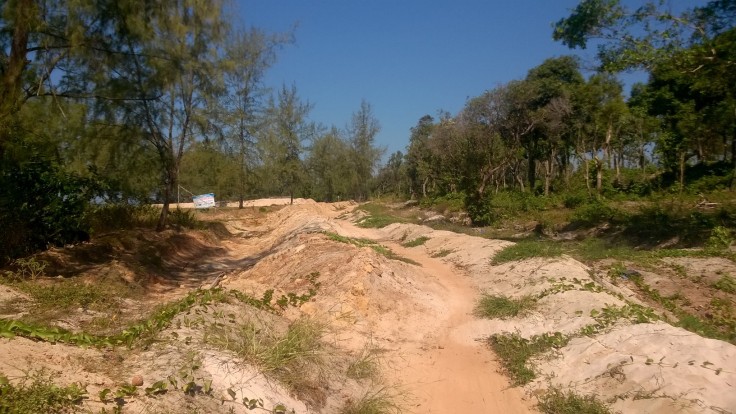 More of the beach. In the distance was a tiny island surrounded by about 5-6 boats packed with tourists who might have been there for snorkeling between beers.

Took a selfie in case I need a new dating website avatar. My age is finally starting to catch up with me.

Some of the food available at the night market.

A port near the market. On the left is a rock temple, and behind me locals and tourists are jam-packed, drinking sugarcane juice, eating street food and watching kids play in the water under a slowly setting sun.

View from the pier. The rock temple is behind that balcony.

Local scene. I made friends with a little girl who would eat a mango nonchalantly and try to chat me up casually until we started making faces at each other. 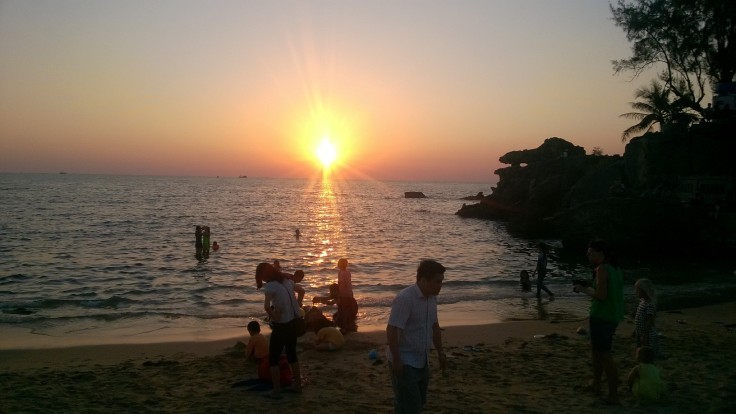 Some of my evening meal. Delicious.

This last year's been rough, physically and mentally with steep highs and deep lows. . . Realising you're often not worth calling in the eyes of others. Ghosted, even. Being talked condescendingly to, looked at like you're the dumbest or most annoying person alive. Maybe I was. Honestly though, I don't think I was. . . Losing your passion for your work, realising you were just another name on the paycheck all along and that your co-workers couldn't care less if you stay or if you go. . . One realisation came to me, that I've lost my spark which made me. Vietnam took that from me. I must now work on myself, and understand the new me, for the sake of my wife, to whom I feel I haven't been the best husband for in the short months we've been married. Nothing serious, but definitely small habits that I wish to remove. . . Tomorrow at 6 am I'm flying to the in-laws. I'll be purposefully taking a break from social media and from posting videos for the next 10 days and just enjoy my new family and simpler, slower life - something I seem to have ignored a bit too much. . . 2020 doesn't look so good right now, but hopefully making the right choices in the coming weeks will set things in the right direction. Recent financial blunders due to my employer not following through on his promises, combined with a need to buy things to feel better, have changed my general plans, so I'm not sure I'll be able to dedicate myself as much to Saigon Geeks as I want, as it just doesn't pay the bills, and I'd like to take my wife on trips to Japan and Canada in the next 2 years. . . A Reddit post also opened my eyes on how much I've been spending on hobbies and material comfort when I could have been saving this money for said trip. A grand "setting the goals straight" is needed as my 35th year on this earth reaches an end. . . Sorry for the long post, but I feel like I need to leave this out instead of keeping it in, and I don't like to talk about it face-to-face. #mentalhealth
First time I get a complimentary, second-hand tea bag with my breakfast. Thanks Phatty's!