To be honest, I’m not the most experienced traveler, but I’m totaling one year away in 7 different countries, so here’s a few tips I’ve collected along the way.

Divide your stuff into smaller bags. Instead of throwing everything together in your backpack, get a bunch of plastic bags (everyone has tonnes of grocery store bags in their house) and organize your stuff so it’s easier to find. The bags also help keep the water off your things. For example, some of my bags are for:

I usually put the least important stuff at the bottom of my bag, and the things I need to access the most near the top. I find myself unpacking and repacking quite often, just to remake a mental inventory and get the weight distribution right.

One disadvantage is that you make a lot more noise than you realize, and you only find out when you’re packing in a dorm at 5 am before you catch that 12-hour bus to the next destination… Probably waking up everyone in the room.

2- Steal your mom’s Tupperware! Or buy some at the dollar store

Instead of plastic bags, Tupperware! If you enjoy playing Tetris, it doubles as entertainment. First of all, all your stuff will be nicely square. It’s also rainproof! The only downside is that if your bag doesn’t have a back support board you might get a corner poking you in the spine. Don’t fret over this, just pack your clothes between your back and the Tupperware!

3- Don’t pack as many clothes

This is one of the best tips that was given to me before my first trip. I usually leave with 3 t-shirts (one for the plane ride, one to change at the arriving airport and one extra), a swimsuit, one pair of shorts, one pair of pants, 2 pairs of socks, and 3 pairs of underwear. As you visit your cities, you can buy T-shirts (who double as souvenirs) and depending on which country you are, they can be pretty cheap too. The only thing is, if you’re traveling for a long time or plan on moving abroad, you might find yourself missing a piece of your old identity… after all, T-shirts are the window to the soul (or something like that). It’s hard to find punk rock T-shirts in Asia.

(read: a school bag that you’re carrying off your chest while you have your huge pack on your back)

On my first trip, I thought that was lame and that people who had a backpack AND a day bag just over-packed. In fact, it’s one of the most useful things to do! Toilet paper, sunscreen, water, a snack, an extra shirt, your toothbrush, your book, your camera, your passport, and sunglasses are now all available at a moment’s notice, instead of you having to walk around the ultra-busy bus station with 15 kg on your back, looking for a quiet and not-so-dirty spot for you to unload your bag so you can find what you’re looking for before they put your bag in the luggage compartment. In tropical weather.

5- Your smartphone is your best friend – and your worst enemy

First time I left with an iPod 4. That was my only electronic. It took care of my music, pictures, internet access, and it’s small enough to fit in a pocket. This time around I bought a smartphone in Hanoi. It was quite pricey, but ultimately it proved very useful. You can get a pretty cheap sim card (in Asia anyways) and texts, minutes and data are pretty affordable if you don’t use it too much. It beats having to use a slow guesthouse computer, you can book rooms in minutes with the right app, and picture quality is pretty satisfying on the latest phones. However, there’s a chance that you will turn into a battery or wifi zombie, looking for a socket or asking for the password everywhere you go, face lit up by your Facebook feed, missing out on good local sights while you one-hand your fried rice with chicken (oh my buddha, did you see how many people were on that bike? No, I’m reading someone’s complaints that they don’t have a partner to drink that bottle of red wine).

If you’re like me, you’ll also constantly be checking your pockets and be worrying about thieves, and double-checking your seats when you leave someplace to make sure you aren’t forgetting it.

At bars, restaurants, and common spaces of hostels and the like, don’t be afraid to sit near a group and eavesdrop on them (if you’re too shy to outright sit with them right away). People are much more inclined to mingle while traveling or living abroad (trying to fill the hole left by cutting ties with friends and family, I suppose) and if you hear something interesting, you can easily join in the conversation (or the drinking). That’s how I found partners to go to the Sky Planks of Hua Shan Mountain. I almost missed out, I thought it was in the next town over!

I was absent-mindedly drinking a beer and playing a game on my tablet when I heard someone talk about it, that he was going the next morning, and was looking for a partner. I immediately closed my tablet and joined in the conversation. We ended up drinking a little bit too much and had quite a laugh – and a really good hike on Hua Shan Mountain.

7- Don’t over-organize (and be spontaneous)

Unless you only have two-three weeks for your trip, don’t have a set date for everything. I suggest you have a list of things you absolutely don’t want to miss, with their location and a tentative date on when you should be there. However, there are a lot more things to discover than what you can find on Trip Advisor or in your travel guide, especially if you meet a local or ask the hostel workers (and invite them for food and drinks after their shift, they love it). Traveling should help you relax and disconnect. Having your nose in your notes, stressing out about where you’re supposed to be, missing out on spontaneous fun because you gotta be somewhere – it all takes its toll.

If you’re stressing out about “No Vacancy”, unless you’re at a popular spot during the high tourist season, you’ll be fine if you reserve 2 or 3 days in advance. You might also be more inclined on skipping some activities to save money. I ended up not seeing the Terracotta Warriors in China because, well, everyone said it was boring and over-priced and that they wished they spent their time and money doing something else (see Hua Shan Mountain).

Take notes of what to do, where to go that people suggested. Draw maps and sketches! You’ll meet tonnes of amazing people on the way, ask them to sign your book! Also, having a notebook out when you’re looking for an address – I think – attracts fewer pickpockets than if you have, say, your new Android phone out to check out the maps.

A pack of cards, Uno, Dominos, Yahtzee, Settlers of Catan, anything! It can be quite nice to break the monotony or do something else than drink beer in the common area of your hostel. I packed Carcassonne (in a Tupperware hehehe) and I ended up playing about 50 games, including one while on a boat at night in Halong Bay and everyone had fun. I also played one game with Chinese students in Lijiang as they were very interested and they turned out to be very competitive.

Most games are packed in a box that’s two or three times too big so that they will take more room on a shelf and attract your attention. Don’t let this deter you! Unbox everything and check out the actual size of the game before you leave.

Word of advice: get one that is easy to explain, quick to play, and that even beginners can win. 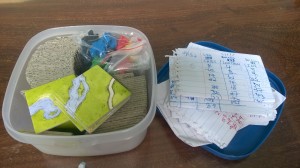 Don’t underestimate them! They’re super cheap, have beautiful pictures and cost nothing to mail. On top of that, it’s super fun to receive one. You could also send some to yourself!

Watch yoself Eminem, there is a new rap God.
Just re-watched this genius at work for the first time.
#animalcrossing